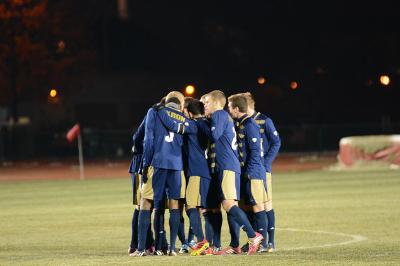 Akron huddled together after a heartbreaking loss at OSU.

In the first round of the 2014 NCAA Tournament Akron was denied advancement after a double overtime tie Thursday against the Buckeyes at their Jesse Owens Memorial Stadium.

The match ended in heartbreaking style after 15 rounds of penalty kicks, which ended with the Zips at a fall of 13-12.

The Zips would strike first, after three misses in the 12th, 17th and 31st minute. Saad Abdul-Salaam was fouled in the box resulting in a penalty kick for Akron. Adam Najem would deliver his 14th goal of the season and provide the Zips with the early 1-0 lead before halftime.

The Buckeyes appeared to have evened the contest in the 33rd minute before Sean Sepe prevented Danny Jensen from recording the equalizer in the box, inches away from the goalline.  Akron outshot OSU 4-1 in the first half and 2-1 with shots on goal.

OSU came out of the half with a pair of corner kicks in the 51st and 52nd minute and then again had back-to-back corners in the 55th minute with no one able to find the back of the net. Akron’s Nat Shultz nearly provided Akron with a 2-0 lead in the 62nd minute, but a sliding save by Alex Ivanov saved the shot.

In the final 12 minutes of the match, both teams were unable to convert anything including a late corner kick for the Zips in the final 86 seconds of regulation.

In the first overtime period, the defense prevailed for both teams as neither attack could really come up with shots to end the game. However, in the 94th minute, the Zips had a chance from a shot by Adi Dakwar after a corner kick from Najem but was once again saved by the Buckeye goalie.

In the second overtime period, the Zips came out to end the game as Mason’s shot in the first minute but felled just wide of the goal. In the 102nd minute, Sepe attempted a cross that Najem missed by inches of the goal box and sent the game into PKs. During this time, the Bucks would also have shots but Jake Fenlason stood strong in the box and saved any threats that came his way.

During the PKs both squads made their first two shots and in the third shoot OSU and UA’s goalies stepped up and denied the shooter from scoring. The next eight were goal after goal as neither goalie could guess correctly or fast enough to save the ball. This left the PKs tied at 10 apiece heading into the 11th round, where again the goalies would step up and save the shot. With fans from both universities on their heels, two more rounds of successful kicks would pass until Ivanov saved the first shot in the 15th round, where Ohio State capitalized on a Zach Mason shot that found its way to the back of the net to lift the Buckeyes past the Zips.