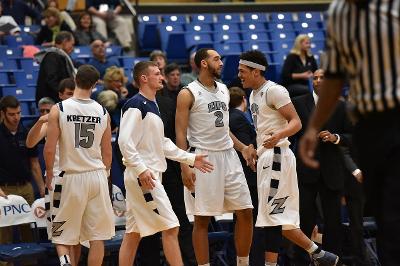 Team celebrating after a win at home against UMBC.

On Thursday, Nov.20, Akron began the tournament with a 66-46 win over USC. Pat Forsythe and Kwan Cheatham Jr. each finished the game with a career high in both points and rebounds. Each contributed 15 points, while Forsythe had nine rebounds and Cheatham Jr. had seven. The Zips outshot USC, finishing with a scoring percentage of 40.0 while the Trojans shot just 23.8 percent. With a lead of 12 at the half, Akron pushed forward and never looked back.

With Akron winning against USC and Miami beating Drexel, the winners got to play each other on Friday afternoon. Both teams started off slow, but Akron secured the first five points of the game. Even though Miami only led by five at the half, they came out of the locker room strong, which lead them to a 79-51 win and the Zips first loss of the season. At the final buzzer, Miami racked up 22 more points in the paint than Akron and ended the game with a 59.3 percent field goal percentage, also shooting 47.1 percent from behind the arc.

In the third place matchup, Akron was up against the Gamecocks of South Carolina, who lost their chance to the tournament championship game by losing to Charlotte 65-63. During the game, Akron started the game off strong and lead by twelve points before the Gamecocks battled back to tie the match at 55 with 6:55 left on the clock in the remaining second half. With ten seconds left, the Zips led 66-66 with a pair of free throws by Cheatham sealed the deal in this highly competitive match by a score of 68-63. Foul shooting gave Akron an edge, making 22 of the 27 shots, while South Carolina only made 11 of their 20. For the game, Nate Robotham led UA in points with 16, rebounds with 6 and assists with two.

Akron’s win over the Gamecocks gave them their first win versus South Carolina in three matchups and was also the first time in Zip history that Akron had defeated two teams from a Power 5 Conference in the same season. Akron also improved their record to 75-23 following a loss under long-time head coach Keith Dambrot.