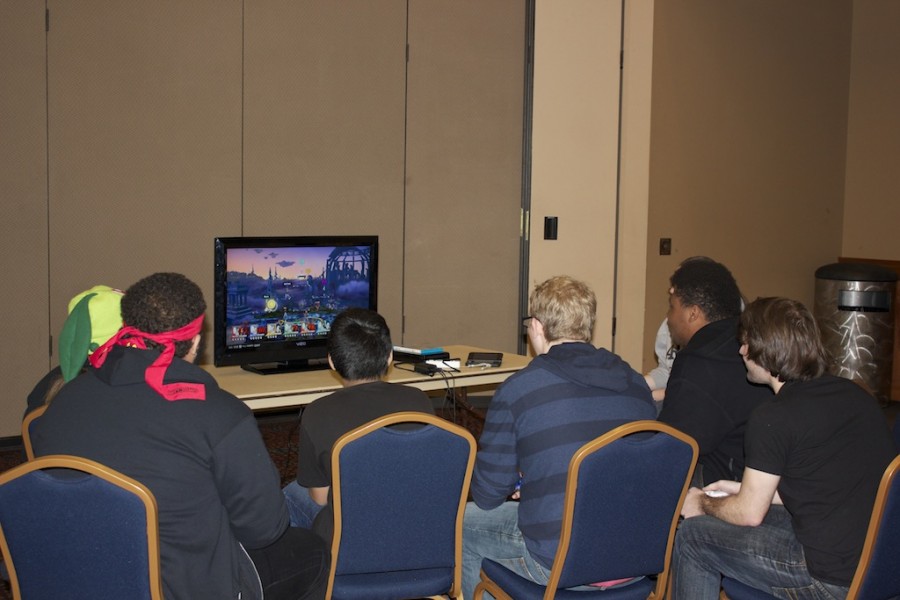 Students compete in Super Smash Bros. on Wii U

The Association for Computer Machinery held it’s 5th annual Child’s Play gaming tournament on Saturday, Nov. 22 from 10 a.m. until 10 p.m. in the Student Union ballrooms. The event had numerous games for attendants to play and six tournaments running throughout the day.

Association for Computer Machinery is mostly made up of computer science students and focuses on anything that includes computer programming. They hold local area network parties once a month and the Child’s Play event once a year.

One ballroom was dedicated to console gaming, with PlayStation 4, Xbox 360, Wii, Wii U and the Gamecube. They also had a projector displaying all tournament contestants standings and brackets throughout the day. Ballroom B was set up for PC gaming, where dozens of students brought in their own computer towers and monitors to compete against one another on the local area network.

Tournaments were held for Halo 4, StarCraft 2, Super Smash Brothers Melee, Dive Kick and League of Legends. The sixth tournament, “Shall We Play a Game”, was to find out who was the best overall gamer. Played across a series of different genre games, each contestant having to reach certain scores to qualify for following rounds. One of the games in the “Shall We Play a Game” tournament was Race the Sun, which is a timed game where the contestants were racing the clock to move onto the next round.

“We’ve received a few more people this year, about 60 people throughout the day and people are sticking around,” said Nicholas Bordo, President of ACM.

Child’s Play was the last local area network tournament ACM is holding this semester, but will continue again each month with more tournaments starting in January.