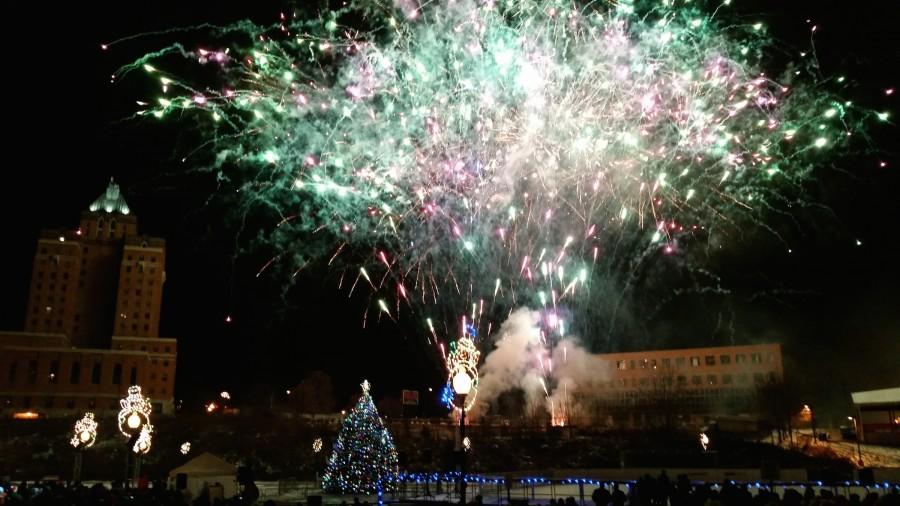 Hundreds gathered on the evening of Friday, Nov. 28 to watch as the annual tree lighting ceremony took place in downtown at Akron’s Lock 3.

The frigid weather did not stop the crowds from gathering to watch Billy Soule set off the night with its festivities.

Sponsored by the Downtown Akron Partnership, the event featured musical guests, ice dancers and vendors serving a variety of drinks, including hot chocolate and seasonal beers.

Akron mayor Don Plusquellic began the festivities by thanking those from the Downtown Akron Partnership who were directly involved in organizing the tree lighting. He made a point to thank the men and women currently serving in the military as well.

“One thing I always try to remember is to think about those people right now who are across the world making sure our world is a little safer, so we can come down and be free and say and do what we want,” Plusquellic said.

The musical performances for the evening featured 16-year-old Akron native Jasmine Moore, who performed a number of classic holiday songs including “Chestnuts Roasting on an Open Fire,” “Jingle Bell Rock” and “Rockin’ Around the Christmas Tree.” Moore was joined by 17-year-old Ernest Johnson for their duet rendition of  “Chestnuts.”

Before the tree was lit, ice skaters from United Ice performed a choreographed routine to Madonna’s “Holiday.”

Once the tree was lit, a fireworks show accompanied by more holiday hits, wowed not just the crowd, but all of Akron that has any visibility to Lock 3.

The 30-foot blue spruce tree was adorned with over 4,000 LED lights of different colors and topped with a shimmering gold star.

There are a number of holiday activities planned through New Year’s Eve for Lock 3 and downtown Akron, including The Holiday Market at Lock 3, Breakfast with Santa, and First Night, a New Year’s Eve celebration featuring ice skating and fireworks.

Lock 3’s skating rink will also be open until Feb. 16. Skates can be rented for $3, but admission to the rink is free if visitors bring their own skates.

More information and a full calendar of events can be found on the Lock 3 official website at lock3live.com.