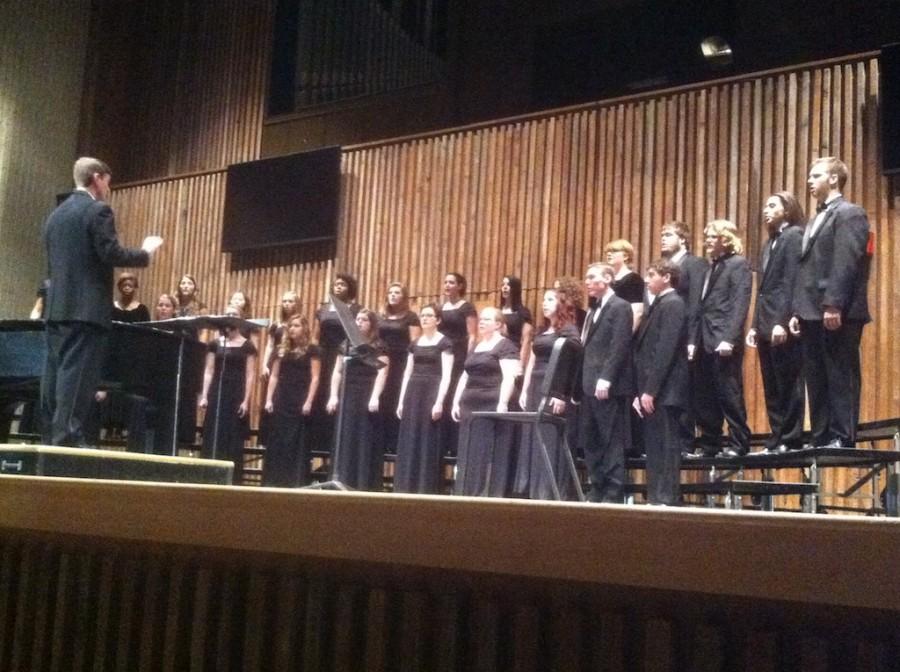 The University Singers conducted by Bryan E. Nichols with Eleanor Kear on the piano performed at the Guzzetta Recital Hall.

On Tuesday, Dec. 2, the group performed a mixture of folk and classical arrangements from around the world: Gloria from Franz Joseph Haydn’s Heiligmesse, William Byrd’s Non nobis domine, a Latin hymn meaning Not to us, O Lord, Friendship Song from a Czech translation, Freedom is Coming from South Africa, Requiem by Giacomo Puccini with Ermal Nikolla on the viola, I Hear America Singing by Andre Thomas and a twist on the traditional Happy Holidays with lyrics from Over the River and Through the Woods with the tunes from Jingle Bells.

Composed of students with majors ranging from Interior Design to Computer Engineering and even a foreign exchange student from South Korea.

“It’s like a singing community with a bunch of people who aren’t music majors,” said Paige Stevenson, senior Interpersonal and Public Communication major. “It’s amazing how different we are and able to mesh our voices [together.]”

The University Singers will return next semester on Wednesday, April 29, 2015 once again at Guzzetta Recital Hall.