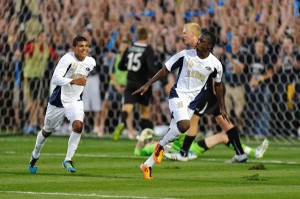 It was all about redemption Saturday night as The University of Akron men’s soccer
team defeated Cleveland State 5-0 in the season opener before a record-breaking
crowd of 5,241 at First Energy Stadium Cub Cadet Field in Akron, Ohio.

The Vikings, who were picked to finish second in the Horizon League behind Butler
in the coaches pre-season poll, were the only team to defeat Akron last season, 2-
1 at Cleveland State on Oct. 30. The Zips finished their 2010 season with an overall
record of 22-1-2.

The Zips, who are ranked No. 2 in the NSCAA poll, wasted little time getting on the
Board, as sophomore forward Darren Mattocks received a lob from near midfield
from freshman midfielder Will Trapp. Mattocks scored his first of two goals in the first half of the game.

“This is a great start,” UA Head Coach Caleb Porter said. “I thought we played well on both sides of the ball, which is what we are always looking for. We did some really nice stuff. I thought in the attack we created a lot of chances and had a lot of rhythm.”

“This is a pretty good start to the season, but we can’t get too far ahead of ourselves,”
Mattocks said. “We just have to keep getting better in training.”

Senior midfielder Michael Balogun made it a 2-0 game in the 13th minute after he
headed the ball in off a corner kick from sophomore midfielder Aodhan Quinn.

Akron’s lead grew once again in the 22nd minute when junior midfielder Scott Caldwell
scored off a rebound from 10 yards out.

Mattocks scored his second goal of the night in the 31st minute of the first half off a
rebound following a shot from UA freshman defender DeAndre Yedlin, which was saved
by Viking sophomore goalkeeper Brad Stuver.

“Darren has taken his game to a whole new level,” Porter said. “He is the real deal and
we are going to need him to be.”

Freshman midfielder Akeil Barrett scored his first goal of his college career in the 48th
minute from 14 yards out, chipping the shot over Stuver to make the score 5-0.

Junior goalkeeper David Meves recorded the shutout with one save, while junior Chad
Barson led a starting defensive unit that consisted of freshmen Bryan Gallego, David
Mayer and DeAndre Yedlin.

“I thought we defended very well,” Porter said. “We are pleased. A lot of the new guys
played well. It is always nice to get that first game under their belt. They played in front
of a big crowd and played with a lot of confidence. Even though we were pretty good
tonight, I think this team still has a lot more left and I am look forward to seeing them
progress.”

UA also improved their all-time record against the Vikings to 35-11-3.

On a side note, the Zips’ last home defeat came in 2007 against the South Florida
Bulls in the second round of the NCAA tournament.

Also interestingly, no one in all of NCAA soccer has been undefeated in conference
play in the past two years except for Akron. The Zips have also posted only one loss in their last 51 matches of regular season play.

UA’s next home game will take place Sept. 16, against New Mexico at 7 p.m.
and will be broadcasted live on the Fox Soccer Channel.