Men’s bounce back with road win 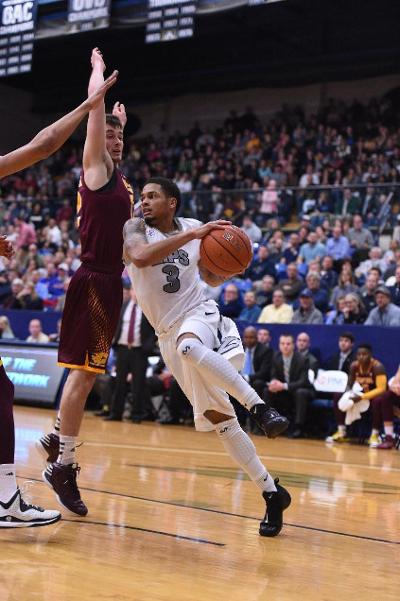 Nyles Evan goes up for shot against Central Michigan.

On Saturday, Jan. 24, the Zips battled Western Michigan to the very end and came out the victors.

Isaiah Johnson made his first start of the year and stood at the free throw line twice during the final 1:05, sinking all four which led to a 71-69 Akron win. This victory snapped UA’s eight-game road losing streak while also completing their first season sweep over the Broncos.

Both teams ended the game shooting 42.9 percent from the field, but Western Michigan topped Akron in almost every area which included rebounds, assists, points off turnovers, points in the paint, and fast break points. Fortunately for the Zips, they topped the Broncos in the only statistical category that mattered, points.

For this week’s match up, the men will host the Cardinals of Ball State University (7-10, 2-4). This game will also feature a give away as the first 1,000 fans will receive a purple t-shirt with “Peters” and the number 14 on the back honoring the late Dan Peters. Peters worked for UA as Director of Basketball Operations and lost his battle to pancreatic cancer on Oct. 27, 2014. Tuesday marks the second annual “purple out” where fans, players, and coaches will celebrate the life of Peters.

The Cardinals have three players who average double figures Sean Sellers (12.6), Zavier Turner (12.5), and Jeremie Tyler (12). Getting the boards off the glass is Matt Kamieniecki with an average of 8.1 per game. Look for them to make an impact to end their four game losing streak.

As far as the Zips, Akron has Kwan Cheatham Jr., Noah Robotham,  Deji Ibitayo and Pat Forsythe who have contributed an average of 39 points per game. Look for these players and others to make a difference to ensure a victory for the Zips.