Zips continue to shine in MAC 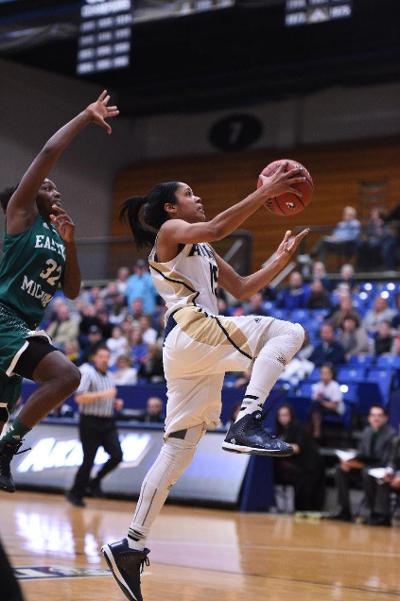 Anita Brown taking a layup against the Eagles of EMU.

This week, junior Anita Brown has been named the MAC East Women’s Basketball Player of the week. Last week, the Zips beat Toledo 102-101 in a come from behind win and also beat Miami (Ohio) 65-47. In those games, Brown averaged 26.5 points, 8.5 rebounds, 4 assists, and 2.5 steals. Against Toledo, Brown recorded her career high and team season high 36 points. She currently averages a team best 20.2 points per game and has scored double figures in all but one.

The Zips are back in action this week versus Ball State and Central Michigan. The women will tip off at 7pm against the Ball State Cardinals on Wednesday at James A. Rhodes Arena. The Cardinals lost their first MAC game of the season on Saturday versus Buffalo, and come into the week with an overall record of 8-8. Akron needs to take advantage of the home court advantage because the Cardinals have only won one road game thus far. Nathalie Fontaine proves herself a threat as the team’s leading scorer and rebounder with 15.7 and 6.6, respectively.

UA will then travel to Michigan to take on the Chippewa’s Saturday at 1:00pm, a game televised on ESPN3. CMU lost their first MAC game of the season on Saturday versus Ohio University, and currently sit at 9-7 overall. Crystal Bradford leads the team by a decent margin in both the points and rebounds per game category. She averages 20.3 points and 9.1 rebounds.