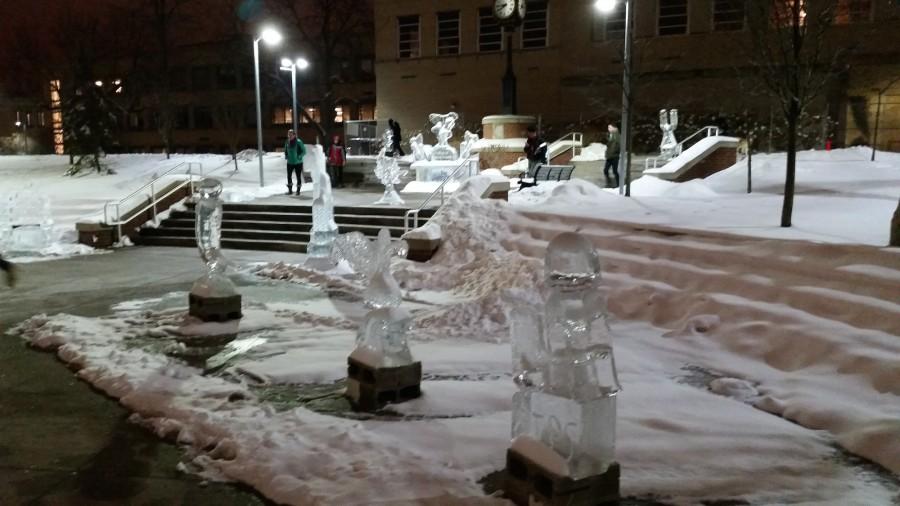 Light shines through the sculptures during the night hours on campus

Amidst the usual snowy, freezing conditions this winter, students and alumni embraced the cold and gathered outside the Student Union to carve sculptures out of ice at UA’s Ice Fest.

The UA Ice Fest, which is an annual event sponsored by the Culinary Arts Clubs, was held from 10 a.m. to 2 p.m. on Tuesday, Jan. 20, outside the Student Union at Buchtel Common and inside the Union near Starbucks. At the beginning of the event, Aaron Costic, a gold medalist in ice sculpting in the 2006 Winter Olympics, carved a large sculpture that celebrated the newly named College of Applied Science and Technology. Costic also sculpted a throne made out of ice at the event.

During Ice Fest, eight students in the Culinary Arts Club used power and hand tools to carve ice sculptures from 300-pound blocks of ice. There was also a second speed carving competition in which four alumni carvers competed in speed carving that began at 11:45 a.m. and was moderated by Chef Richard Alford, associate professor emeritus of hospitality management.

The sculptures that were created ranged from a butterfly to a throne. Inside the Student Union, many students and alumni carved fruit and vegetable sculptures and visitors were welcome to mold salt dough sculptures. Salt dough is a type of dough used to make basic culinary sculptures.

“I think that looking at the ice sculptures gives me an almost serene experience,” said Residence Hall Council President Jason Hemperly. “Sometimes it gives you a break from reality. As for others, many of them get excited to see what has been created,” Hemperly said.