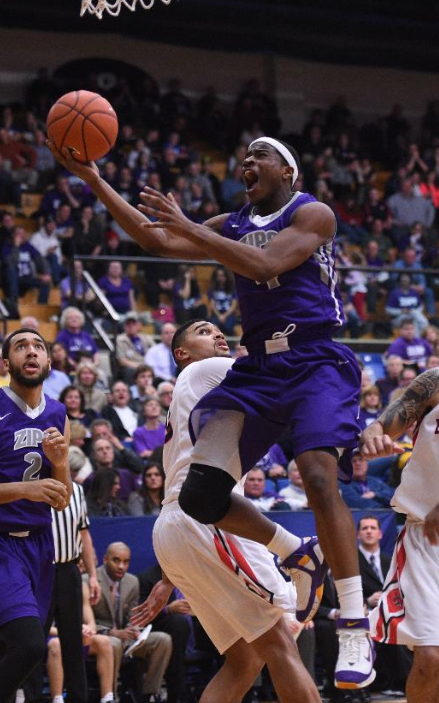 Deji Ibitayo taking the ball into the paint for a layup against Ball State.

On Tuesday, the Second-Annual Purple Out game was celebrated as the Zips (14-6, 5-2) took on the Ball State Cardinals. The men’s basketball team defeated Ball State with a final score of 59-47, making this victory their 12th-straight against Ball State.

In the first half of the game, the Zips were shooting at 33.3 percent and the visiting team had similar difficulties in the offensive as they shot 30.8 percent from the field. However, Akron improved their accuracy in the second half as the Zips shot 50 percent for an overall of 41.8 percent (23-55). The Cardinals (7-11, 2-5), improved as well to an overall 37.5 field goal percentage, connecting on 18 of their 48 shots during the game. Other notable stats include Ball State having 12 turnovers to Akron’s 13, both teams tied at 12 assists in the game, and Akron out-rebounding the Cardinals 37 to 32.

Player of the game was Pat Forsythe, who scored his career high of 17 points, with five rebounds and two blocked shots. Aaron Jackson was able to score seven points and get three rebounds, while senior Deji Ibitayo had two steals, three rebounds, and added nine points for the Zips.

Zips will be on the road for the next two games. On Saturday, Jan. 31, Akron will play against the Falcons of Bowling Green State University (13-5, 5-2) at 7 p.m. This will be the second time  this month Akron and BGSU are playing against each other and will look to sweep the Falcons after a home win of 67-50 Jan. 14. Then the team will travel to Athens, Ohio on Feb. 4 to take on the Bobcats of Ohio University (7-11, 2-5). Their record may be down this year but OU has always played the Zips tough and will come to the game expecting to take down the Zips on their home court.

The Zips will return home Saturday, Feb. 7 to host the Bulls of Buffalo University. Game starts at 7 p.m.