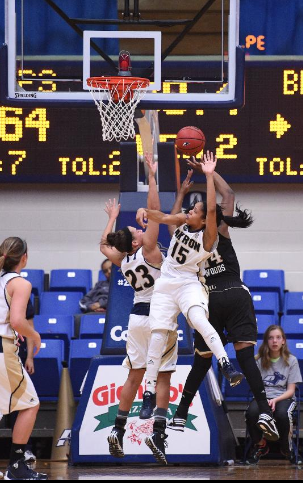 Anita Brown and DiAndra Gibson defending the basket against WMU.

The Zips lost a tough battle in DeKalb, as the Women’s basketball team which led by 15 points with eight minutes remaining in the game, falling to the Huskies of Northern Illinois (10-10, 6-4 MAC) 62-56. The loss snapped a three-game winning streak and now holds a 17-5 record 7-4 in MAC play.

The Zips struggled out of the gate, handing NIU an 8-0 run to start the game. Akron would then have their own 8-2 run pushing Akron within two. Both the Zips and Huskies would trade buckets the remainder of the half, as the Zips held onto a one-point advantage going into halftime.

The Zips came out in the second half electrified, as Akron would go on a 10-0 run, pushing their lead to nine, 37-28, with just over 16 minutes remaining in the game. Akron’s largest lead would come with 8:36 remaining, as the Zips held a 51-36 advantage, before the Huskies whittled the lead down the stretch.  The Huskies’ Amanda Corral lit up the court for NIU, who scored 14 of the final 18 points for the Huskies. With a 56-56 tied and just 1:19 remaining in the game, Corral would nail a three and four free throws, which secured the victory for the Huskies.

Sina King led the Zips with 17 points and six rebounds, and Hannah Plybon followed with 16 points and six boards. Corral led all scorers with 31 points and 10-11 shooting from the free throw line.

While Akron shot better from the charity stripe, out-shot, out-rebounded NIU, the difference in the game came down to turnovers as the Zips committed 15 turnovers, while only forcing NIU to eight.

Akron will host Buffalo on Student Appreciation Night on Wednesday, Feb. 11 at 7 p.m.