Men escapes horns of the Bulls 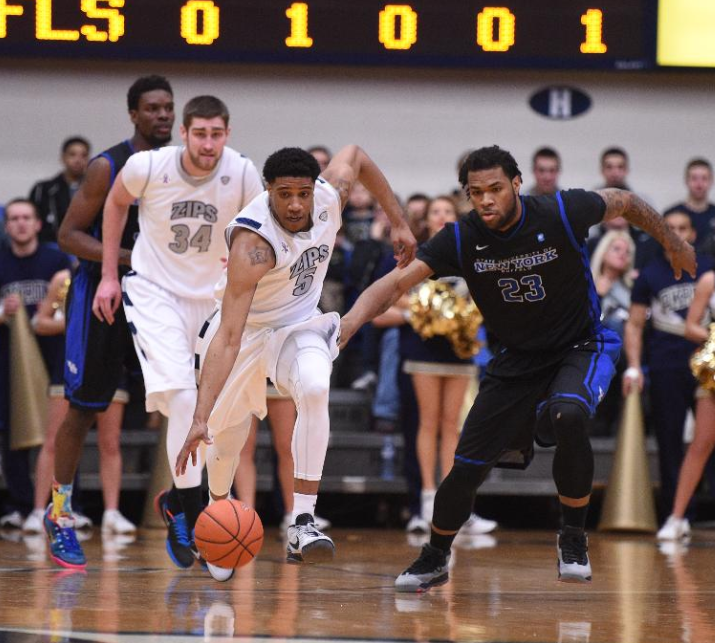 B.J. Gladden after stealing the ball from the UB player.

On a snow-free Saturday night, the Akron Zips (16-7, 7-3) bounced back from last Wednesday’s loss to Ohio University with a close victory over the Buffalo Bulls, 75-72.

The entire contest was a neck-and-neck affair with neither team having a double digit lead throughout the entire game. The Zips offense consisted of a balanced attack by keeping everyone involved, with five players scoring in double figures. However, for Buffalo, their source of points came primarily from Senior Xavier Ford (22 points) and star Forward Justin Moss (21 points), who leads the MAC in scoring at 18.3 ppg. Both had breakout games with Ford and Moss combining for 43 points, but the Zips tightened up their defense in the second half, holding the explosive duo to a quiet 12 points combined in the second half after the duo combined for 31 points during the first half.

The Zips were fortunate to have major contributions from their bench, heavily outscoring Buffalo’s non-existent bench scoring 30-2. Sharpshooter Jake Kretzer provided biggest spark, draining three 3-pointers to lead all bench scorers with 13 points, tying a season-high for him. Aside from a nightmare from the free throw line (15-26, 57.7 percent), the 3-ball played towards the Zips favor, connecting on ten 3-pointers with Kretzer and freshman point guard Noah Robotham each adding three of their own.

The Zips held a thin three point lead heading into the game’s final possession. The Bulls launched a barrage of 3-point attempts in hopes of tying the game before the end of regulation to send the game into overtime. Luckily for the Zips, Buffalo wasn’t able to convert any of their desperation 3-point attempts and the Zips walked away victorious.

Saturday’s win over Buffalo creates a three way tie for first place in the MAC-East division with both Kent State and Bowling Green also sitting at 7-3 in conference play. The Zips can now focus their attention on the much anticipated Wagon Wheel challenge against bitter crosstown rival Kent State, with the first installment taking place this Tuesday, Feb. 10 at the JAR. The Golden Flashes may not score the ball particularly well (65.3 ppg, 10th in the MAC), but they do defend extremely well, only allowing 60.7 points per contest.

Both teams will need no further motivation, for this game will determine first place in the MAC-East division and temporary bragging rights until the Zips and Golden Flashes face-off once more in the season finale on March 6.