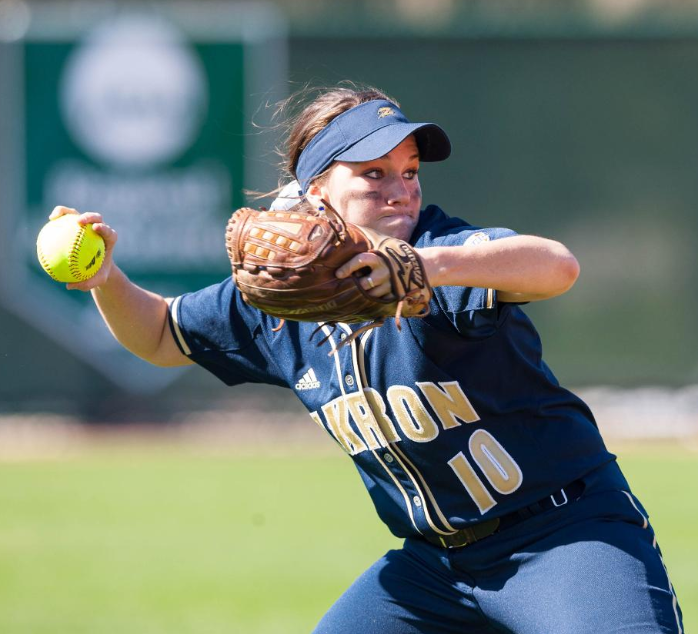 Chelsea Wildey throwing the ball to first base during the game

After a five game weekend series in the Stetson Tournament, the Zips went 2-3.

The tournament began on Friday, and the Zips struggled, coming up with two losses. They first lost 5-0 to Michigan State, and followed that with an 8-7 loss to Morehead State. The Spartans came out strong, and sophomore pitcher Valerie Kaff gave up only one hit in her seven innings of work. Her offense helped her by scoring three runs in third and two in the fourth.

In UA’s second game of the day, they looked strong at the start, scoring six runs on only two hits. Savannah Fruin homered to right in the bottom of the first, bringing in three runs, two earned. The five walks in the inning and three unearned runs gave Akron an early 6-0 advantage. In the bottom of the second, Chelsea Wildey began the inning with a walk, coming in to score on Fruin’s RBI. This put the Zips ahead 7-0. In the fourth, Pearson gave up her first run of the game, but still looked strong. In the sixth inning, she gave up five more runs, followed by McMenemy’s two, giving her credit for the loss.

On Saturday, Feb. 7the Zips had to make the necessary adjustments on the field. They started the day with a 5-0 win versus Rhode Island. Erin Seiler recorded her first win and complete game shutout of the season. In the first, Kellie Roudabush scored the first run on Olivia Hendricks wild pitch. In the top of the third, Taryn Allmon tripled to left, followed by Chelsea Wildey’s RBI on a single to center. The final three runs came in the sixth.

The day ended with a 10-0 mercy, coming from Stetson in five innings. Stetson scored seven runs in the third, two in the first, and their final one in the fifth, and Akron could not capitalize even on run in the bottom of the fifth to prolong the game. Akron had three hits during the game, and Sarah Pearson got the loss (0-1).  Pearson gave up five earned runs in 2.1 innings pitched, and McMenemy gave up the other five in 2.2 IP.

The Zips ended the weekend with a rematch versus Michigan State, and this time came out with a 4-2 victory.

Akron will travel to Florida again this weekend to take part in the Jackson Tournament, with the schedule as follows: