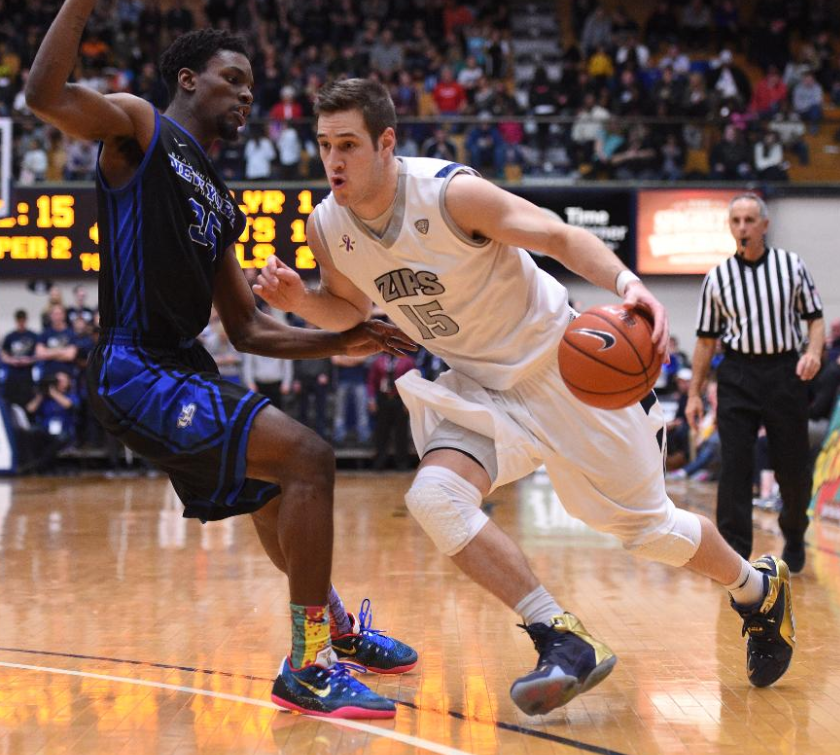 Jake Kretzer in the process of driving to the basket against UB.

The University of Akron will travel to Michigan on Saturday, Feb. 14 to visit the Eastern Michigan Eagles in a game that could be pivotal for both teams.

Eastern Michigan is currently standing in fourth place in the MAC West Division with an overall record of 15-9 and a conference record of 4-7. In their last seven games they have under performed and lost four games to MAC foes like Central Michigan, OU, BGSU and Toledo, however, during this stretch they have rematches against OU and Miami which they won.

Eastern Michigan is both the best and worst when it comes to shooting percentage. On offense they come in dead last shooting at a dismal 40.5% but when on defense, the Eagles only allow their opponent to shoot 36.8%, which leads the MAC. This trend continues for EMU through the stat lines. The Eagles defense is built for defense as they give up 61 points per game and only allows 29.9% of three balls to sink into the basket. On the boards, this team ranks among the best in the MAC as they average 38 rebounds per game. Akron will need to be mindful of this and take high percentage shots, meaning taking the open shot or passing the ball in order to get a player open. This could also mean driving to the basket and commanding the points in the paint, while also getting opportunities to get fouled and shoot free throws.

Look for Raven Lee to make an impact in this game, as he is the Eagle’s leading scorer with an average of 15.8 points per game. Lee also hits 38% of his shots behind the arc and has 40 steals this season. Karrington Ward is another Eagle to spotlight as he leads the team with rebounds with 6.2 a game. This season Ward has also blocked 29 balls from going into the basket and averages 11.8 points per game. This season the Eagles are pretty much unbeatable at home hosting a record of 13-1 and will look to improve that record against Akron.

For Akron to get this win in the Convocation Center the Zips will look for a big game from Pat Forsythe, a player who has emerged as a star and played with intensity and strength below the basket with a team high of 10.8 points and 5.3 rebounds per game. Akron will also need great bench points as they have out-scored the opposing team 121-46 in their last four games. Other players to spotlight are, Noah Robotham who leads the team with 3.3 assists per game and averages 9.7 points, the sharpshooters Reggie McAdams and Jake Kretzer are explosive behind the arc shooting 40% and 35% respectfully while also contributing on the defensive end blocking shots and creating turnovers. Lastly, senior, Deji Ibitayo has stepped up as a sixth man for Akron by averaging 9.9 points.

The Zips will need to shut the crowd up and take command of the game through their fast flowing offense and ball handling skills. They will also have to get the Eagles to turn the ball over to the Zips to produce fast break points and limit any chances of an upset up north.