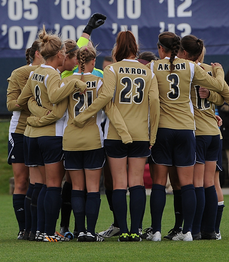 New women’s head coach, Coach Noreen Herlihy, has scouted and recruited across the nation for her first class of future Zips.

“I am very excited to have these student-athletes join our program,” Herlihy said. “They are coming into a new era at Akron Women’s Soccer, and I am confident they will contribute in a positive way to the success of this program. I know, as young players, they are excited to meet the challenge head on as we look to see our program progress.”

The Zips have signed a total of seven new student-athletes for the 2015 season. The seven new Zips who will be representing the Blue and Gold are Rachel Baughman, Lexi Cooke, Becca Gordon, Shea O’Brien, Rachel Schirripa, Erica Schrader, and Kiana Zuk.

Getting to know the new Zips:

Baughman-is a forward from Louisville, Ohio. At her time playing with the Leopards of Louisville High School, she became the school’s all-time leader in goals (118), and assists (36).

Gordon-is another forward from Johnstown, Ohio. During her time in high school at Johnstown-Monroe, she became the school leader in goals (82), assists (45) and was honored as a all-conference and all-district twice.

O’Brien-is a midfielder from down the street from Akron’s Campus as she attended Akron St. Vincent-St. Mary High School. However, she did not play with the Irish, instead O’Brien was apart of a club teams and has led her team to five state championships as well as the 2012 U.S. Club National Title and championships with the Elite Clubs National League.

Schirripa-is another forward for the team and hails from Strongsville. During her time at Strongsville High, she was a member of the undefeated state championship team and has been honored with two all-conferences.

Schrader-is the second midfielder on the team. She went to Gahanna-Lincoln High School and was recognized with all-conference and all-district.

Zuk-is a defender and went to Holy Names High School, in Parma Heights, Ohio. She will be competing in her last soccer season this spring and has been named a two-time all-star.

Soccer went 6-12-1 last years and has now replaced seven seniors from last year’s rosters with the seven that are listed above. Look to The Buchtelite for future news about the season coming later in the off-season for the Lady Zips.