Men’s basketball shines through the gold in the Golden Flash 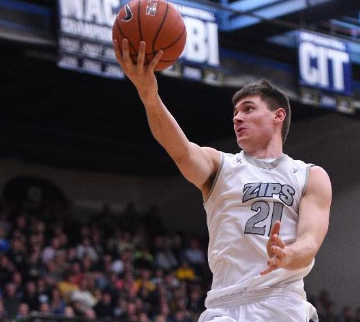 Reggie McAdams easily shakes off defender for an easy layup against rival Kent.

On Wednesday night, the JAR was packed with nearly 5,000 fans amped up and ready to see their Akron Zips take down crosstown rival Kent State in a 61-52 victory. The win trims a three-way tie for first place in the MAC-East division to two teams, Akron and Bowling Green University, who both stand at 8-3 in conference play.

Junior standout center Pat Forsythe led the Zips, scoring a team-high 12 points along with two blocks in only 20 minutes of action. With Head Coach Keith Dambrot distributing his minutes to all his key players, his bench once again stepped up huge, scoring 30 points in the game. Senior Deji Ibitayo led a strong Akron bench with 11 points with five rebounds. The sharpshooting duo of Reggie McAdams and Jake Kretzer both knocked down clutch three-pointers at key moments to hype up a packed home crowd that energized the Zips all night long.

The first half was a defensive slugfest with both teams struggling to execute on the offensive end. The stingy Zips defense held the Golden Flashes to eight of 25 shooting (32%) and forced seven turnovers. It appeared the Zips were going to run the Flashes off the court with a 10 point lead, but the Golden Flashed answered with a 12-2 run to keep them in the game, ending the half with a slim Akron lead by two, 25-23.

Throughout the second half, the Zips proved a strong overall team effort can outweigh breakout individual performances. The Golden Flashes offense featured senior Devareaux Manley and Chris Ortiz, who combined for 21-second half points, but the Zips collective team effort proved to be too much for Kent State to handle. After the game was tied at 37 a piece around the 14-minute mark, the Zips turned up the intensity and finally broke through their first half struggles to stretch their lead to a much as 17-points, en route to a 61-52 victory. In the end the Zips had 30 rebounds, 13 assists, six turnovers, and 30 points within the paint.

For their next game, the Zips will travel up north to take on the Eastern Michigan Eagles (15-9, 4-7). They score the ball just as well as Akron, both at 69 points per game however; the Eagles score their average 69 points inefficiently by being ranked dead last in the MAC in field goal percentage (40.5%) and three-point percentage (30.3%). On the defensive end, they are an extremely tough bunch, only allowing their opponents to shoot 36.8% from the field (first in the MAC) and 29% from three-point range (second in the MAC). Look for the Zips defense to aim to contain Eastern Michigan’s star guard Raven Lee, who ranks fourth in the MAC in scoring at 15.8ppg. The Zips will also need to control the defensive glass, as the Eagles thrive in the offensive rebounding category, ranking first in the MAC at 38.4 per game.