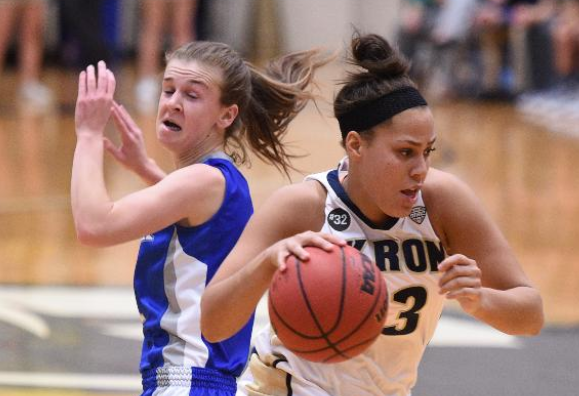 DiAndra Gibson passing by a UB defender on her way to make a layup.

On Wednesday night, the women’s basketball team who currently sit at (17-5 7-4) rebounded well from a tough loss to Northern Illinois with a double digit victory over the Buffalo Bulls, 81-70.

The Zips battled the entire game with the score being knotted at 36 all in the first half, and seemingly looking to head that direction in the second half. However, tremendous offense contribution from the Zips with four players in double figures. For Buffalo, their leading scorer forward Kristen Sharkey lead all scorers with 22 points and forward Christa Baccas added 14 points to be the second leading scorer for the Bulls. The second half, the Zips owned the boards with 40 rebounds in the entire contest. Akron also had several second chances with 20 points coming from offensive rebounds, which played a crucial part to the victory for the Zips.

Akron started to pull away with a big triple from sophomore guard Hannah Plybon, her fourth triple of the night finishing as she ended the game with 21 points. Following Plybon triple, Anita Brown completed a timely three-point play, meaning she made a basket while being fouled, with 1:30 to go and putting the Zips up 75-69. With the Bulls trying to extend the game the Zips did not fall and finish the game with a perfect 7-of-7 from the free throw line.

With Wednesday nights win over the Buffalo Bulls, The Zips are still sitting in second in the MAC-East Division at 18-5 8-4, 2.5 games behind Ohio University. The reaming schedule for the Zips won’t be a cake walk with six conferences games to go including Toledo, Ohio, BG and a Buffalo team who will try to avenge their loss to UA on their home court later this month.

Make sure you come out and support the Zips Saturday, Feb. 14 at home which should be nothing short of a thriller against the Rockets of Toledo.