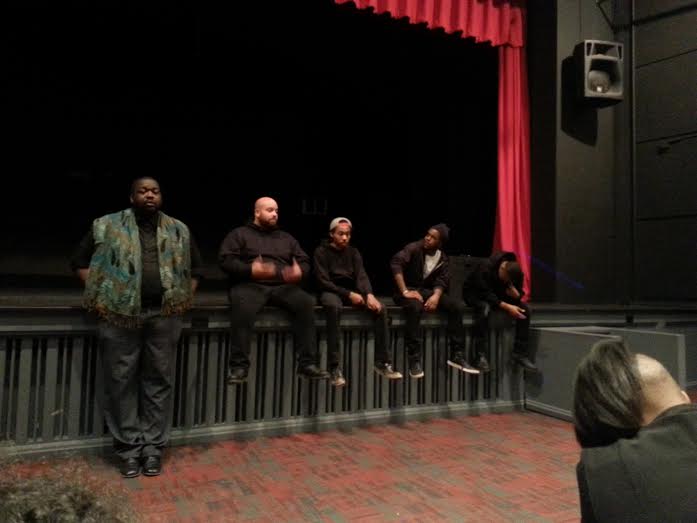 Director and cast members from the play, Or Does it Explode?

In honor of Black History month, “…Or Does it Explode?” premiered at UA’s Daum Theater on Thursday, Feb. 12 for the Rethinking Race series.

This play is based off of the Langston Hughes poem called “What happens to a dream deferred?” Told in segments, each part represents an important issue that is happening or has happened to African Americans over the years.

John Dayo-Aliya, who co-wrote and directed this play, said, “This is not a show of solutions, it’s a show of questions; a series of fragments; keyhole glimpses into the experience of black men in the American urban metropolis.”

Dayo-Aliya based this play off another play called “For Colored Girls who Considered Suicide,” which is also told in a series of poems. “I’m a poet, that’s my primary medium. I can use this gift God gave me to use it to use it as a platform to raise awareness,” Dayo-Aliya said.

The play touched on a lot of topics such as police brutality, mixed ethnicities, and alienation from society. A strong theme in this play is the recurrence of being invisible. It focused on being invisible to the world around them, as individuals and as a race.

Tyson Sebree, one of the actors, said, “I think the only thing I want people to get from this play is a sense of humanity. We’re all people. I’m glad I can do something that raises awareness.”

Dontez James, another actor in the play, strongly believes in the message this play is conveying. “This play talks about a lot of subjects that aren’t just black exclusive. My piece about being a black kid in an all-white school is the same as if it were say a Muslim kid. It’s a play where everyone can take away something from it; it’s the most powerful thing about it,” James said.

This minimalist play did not rely heavily on props or scenery. The stage contained one backdrop and a couple of solid boxes. The actors were restricted to using the shadows and their dialogue to convey their messages to the audience.

This traveling production is funded by a grant from Kent State University for the Department of Pan-African Studies. They have been performing this play for six months, and are planning on another show in the future.