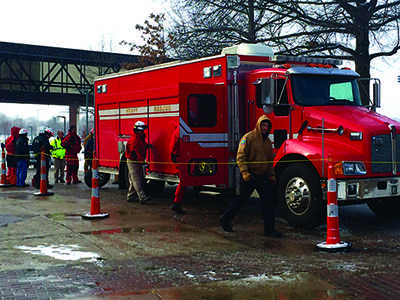 Students might have seen a dozen firetrucks and EMS vehicles between James A. Rhodes Arena and Kolbe Hall on Feb. 11 and 12. These drills were run by the Summit County Technical Rescue Operations whose abilities go beyond just firefighting and EMS.

The drills took place inside of a small tunnel located where Memorial Hall used to stand, just outside of Kolbe Hall. Around 50 rescue workers were performing confined space rescue drills.

The Occupational Safety and Health Administration defines these drills as “a space that is large enough and so configured that a person can enter to perform assigned work, has limited means for entry or exit, and that is not designed for continuous human occupancy.”

Practical use of these drills include going into silos, tanks, vaults, and many other confined areas as part of a rescue mission. This kind of environment can also include variables such as oxygen deficiencies, toxic air, or a flammable atmosphere, according to Cuyahoga Falls Fire Department.

“We support and provide their needs for training when they need it,” said David Tiller, Director of Department and Environment and Occupational Health and Safety.