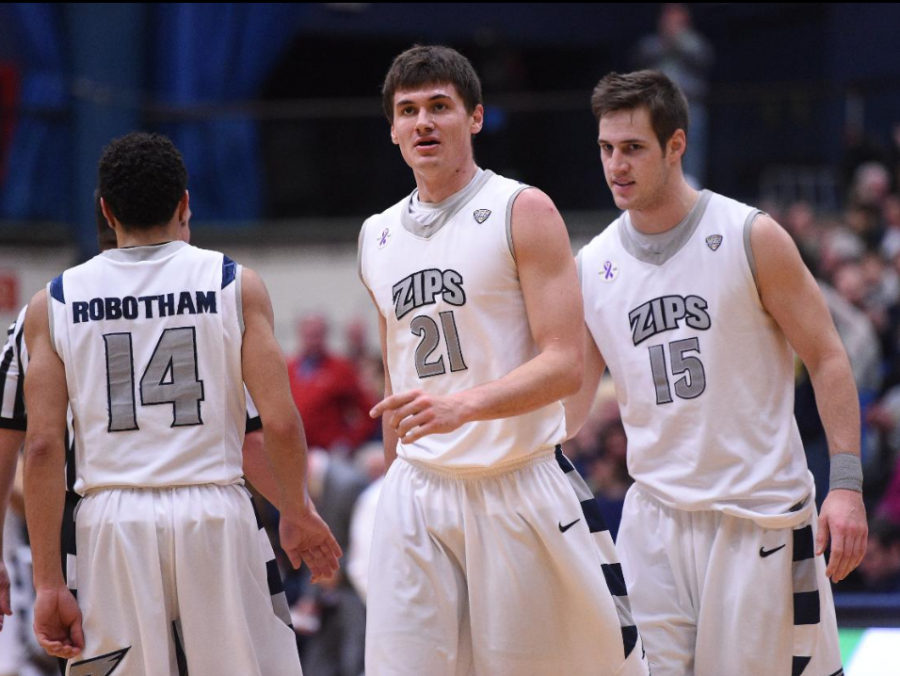 Left to right, Noah Robotham, Reggie McAdams, and Jake Kretzer before tip off

The men’s basketball team will look to avoid a massive upset when the RedHawks of Miami (Ohio) come to the JAR on Saturday, Feb. 21 at 7:30 p.m.

Akron is coming off of a loss to Eastern Michigan by a final score of 78-75 on Valentine’s Day. They now stand in second place behind a team that the Zips have already swept this season, the Falcons of Bowling Green. Miami, on the other hand, is the second worst team in the conference with an overall record of 9-16 and a MAC record of 4-8, however, they are on a one game winning streak after beating Ohio 77-66.

The RedHawks are eighth in the league in scoring with an average of 66.7 points in a game. Offensively, they make 44.8 percent of their shots and have made 34.4 percent of their shots behind the arc for the three ball. The RedHawks also have the leagues’ worst scoring defense with an average of 70.8 points per contest as well as allowing their opponent to shoot 47.3 percent from the field. Miami is not a great rebounding team (29.7) and turns the ball over nearly 14 times per game. If Akron can take advantage of these weaknesses, there will not be any room for a RedHawk victory.

Miami has three main players; Eric Washington, Geovonie McKnight, and Will Sullivan who combine for an average of more than 35 points per game. McKnight is a ball magnet, as he leads the team with 41 steals in the season while Washington is the distributor on the team with 138 assists in the season so far. The Zips will need to keep an eye on Washington to turn the ball over as well with his 87 turnovers for the year, a team high. Sullivan is an efficient shooter at 49.7 percent accuracy and 56 shots from behind the arc. Sullivan also leads the team in rebounds with 107 boards for an average of 4.3 a game and has 40 assists in the season as well. Look for these three to put pressure on the Zips and come out with a win if the Zips allow the RedHawks to stay within striking distance.

Akron (17-8, 8-4) will use this win to get back into first place in the MAC East. The  Zips will look to overpower Miami and finish the last leg of the season on a winning streak before heading up to Cleveland to fight for another MAC title.