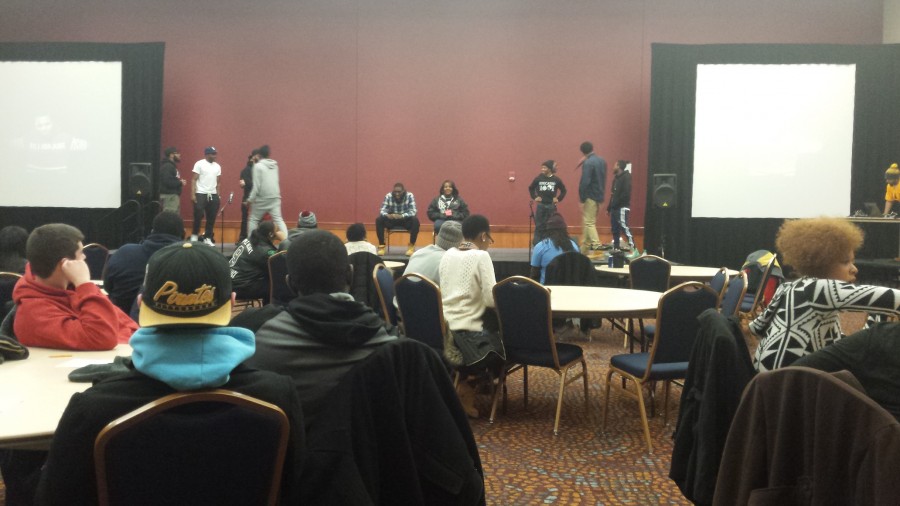 Akron’s National Panhellenic Council presented the Wild’n Out Comedy Jam at the Student Union on Feb 19. Students packed into the ballroom to laugh and participate in games with improv comedians in honor of Black History Month.

The concept of a Wild’n Out comedy show is having two teams of comedians perform improvisational comedy games to get the best laugh out of the audience.

The comedians had multiple improv games to get audience members involved in the show which included testing out pick-up lines on volunteers and introducing audience members as a part of their family during a family reunion.

In another segment they tried their best to get volunteers to spit out a mouthful of water in a game titled “Talking Spit.”

The show is focused around adult humor and is recommended for a mature audience. However, as host Nick Banks stated at the start of the show, “It’s all in good fun.”

The Greater Akron Chapter of the National Panhellenic Council is composed of predominantly African American fraternities and sororities. Members of nine different houses made appearances at the show to celebrate their culture and have fun.

Each group got to showcase their pride by participating in a tradition called “strolling.” A few members from each chapter stood up and ‘strolled’ through the audience, performing a dance choreographed by the members themselves and taught to new members each year.

The comedy jam’s purpose was to honor Black History Month. Their goal was to bring something different to campus so that students could have fun and interact with the comedians and one another.