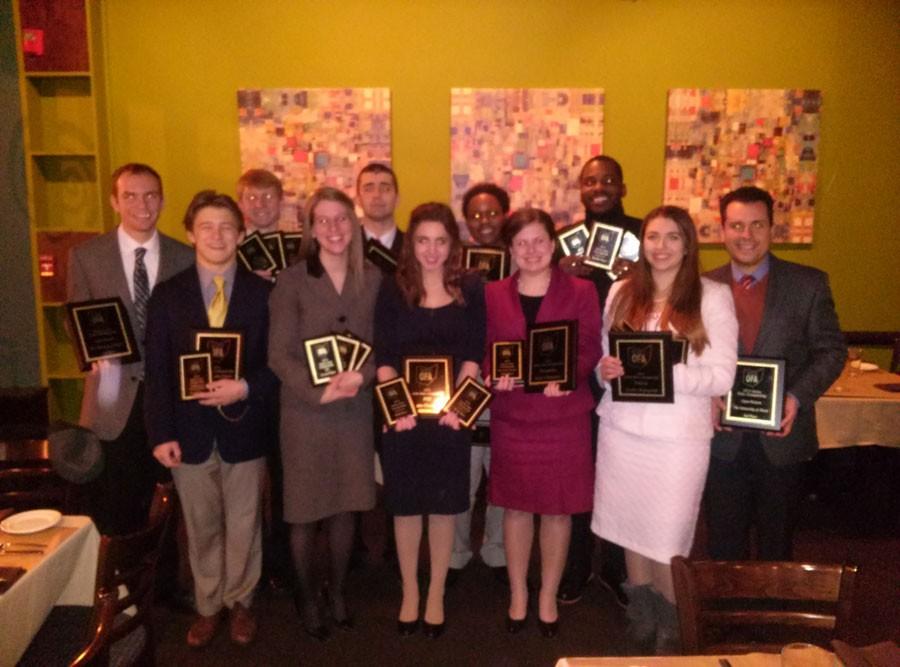 The Speech and Debate Team members pose at Bricco restaurant in downtown Akron after the OFA State Championship.

The tournament was held in Kolbe Hall, beginning Saturday and ending with the award ceremony in Paul A. Daum Theatre on Sunday evening.

“It feels really good to know all the hard work my teammates and I have put in over the season has paid off and that we as a team worked together, and [that] I was able to win for The University of Akron,” Zerull said.

In addition to the successes of Fowkes and Zerull, five other team members were individual state champions in their respective events: senior Tyler Jordan in Dramatic Interpretation, sophomore Kelsey Jones in Program of Oral Interpretation, sophomore David Trujillo and his partner, freshman Grant Morgan, in Parliamentary Debate, and Alyssa Gieseck in Persuasive Speaking.

Gieseck’s win in Persuasive Speaking qualified her for the Interstate Oratorical Association’s National Championship Tournament at Berry College in Rome, GA. This is the oldest competitive collegiate speaking organization, dating back to 1874. Only the top two finalists of the Persuasive Speaking event were awarded this opportunity.

Other team members who competed at the event but did not break into their final rounds include senior Demetrius Brown, junior Danielle Shatto, sophomore David Hench, and freshman Christopher Halley.

“I could not be more proud of the students’ successes this weekend,” said Coach Mark Rittenour. “[UA’s forensics team] is a bastion of excellence in communication; and the students, coaches and alumni serve as national ambassadors for our university. As a community, we should all join together to celebrate these students, their mentors, and these outstanding results.”

10 UA alumni helped with the running of the tournament and served as judges, including Andrew Golden, the UA Speech and Debate Team’s graduate assistant. Some of these alumni also regularly return to campus to help coach team members throughout the season, including former forensics team members Katie Giglia and Kady Skowron-Overton.

The team is headed next to two national competitions in April of this year.

“I am so excited by the potential of our students this season,” Rittenour said.