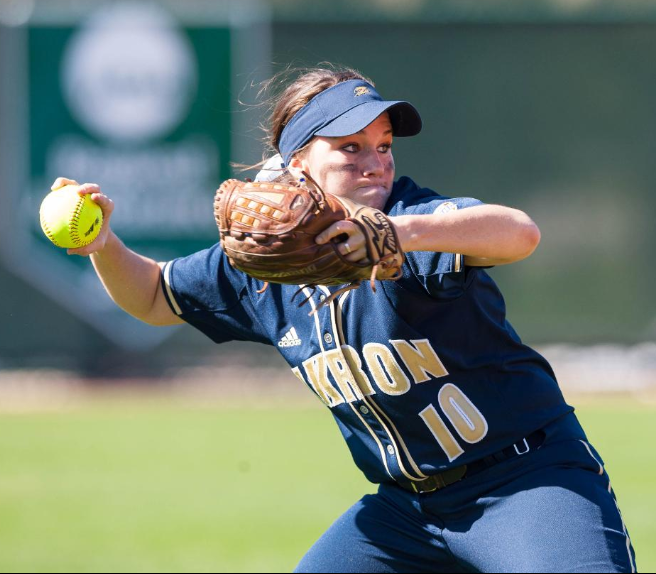 Chelsea Wildey pitching the ball during a weekend of action.

The Zips softball team endured a tough weekend when they traveled to Nashville, Tennessee to play in the Lipscomb Purple/Gold Challenge. Unfortunately, Akron lost all three games.

On Saturday, Feb.28 the Zips started the weekend versus Western Kentucky, where they fell 14-0 in five innings. Outfielders Sara Pearson and Savannah Fruin posted the only hits of the day. As for pitching, Paige McMenemy picked up the loss, giving up six earned runs and five walks. Of the 14 runs, Western Kentucky only earned eight, but the walks and Akron’s errors helped them get the other six.

Later in the day, Akron played the host of the tournament, Lipscomb. The Bisons came out strong with two runs in the first and a run that insured a win in the second. Akron battled back in the fourth with an RBI single from Alyssa Nicholas, which scored Pearson. In the fifth, Kellie Roudabush hit a single letting Caitlin Gambone score, and the Zips now only trailed by one. The Bisons captured the win.

In their final game of the weekend, Dayton and Akron battled in extra innings. Dayton hit early, recording three runs in the bottom of the first. UA fought back with one run in the second due to McKenzi Rhodes home run down the left field line. The team added two more runs in the fifth with Gambone’s double to left center, scoring Kayla Schlosser, and Gambone came in to score on a wild pitch, which brought it to a tie game. Each team came back and added one run in the sixth and none in the seventh which led to extra innings. After gaining a run in the eighth, Dayton added two and got the win.

On March 6 through 8 the Zips will compete in a weekend tournament that will take place in Winter Haven, Florida where the Zips have six scheduled games.