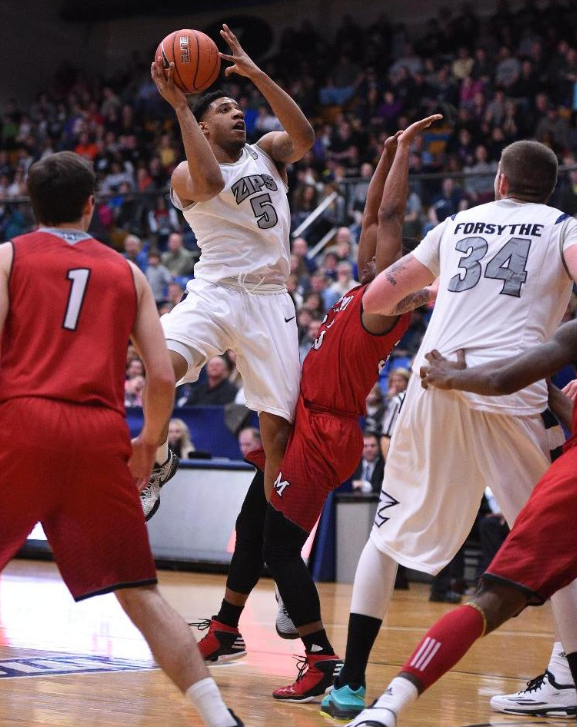 B.J. Gladden taking the ball into the paint and taking a shot for the Zips.

After snapping their four-game losing streak versus Ohio University in a 70-58 victory on Senior Night, the Zips men’s basketball team (18-11, 9-7) look to avenge their loss to the Miami Redhawks (12-17, 7-9) this Tuesday, March 3. The two teams last faced each other back on Feb. 21, where the Zips fell to the Redhawks in a devastating overtime loss, 57-52.

The loss to Miami led to another close loss the Buffalo Bulls, 67-62, which knocked down the Zips a few spots in the MAC-East division standings in anticipation of the MAC Conference Tournament. The Redhawks, winners of four of their last five, are peaking at the right time, as the Zips, losers of four of their last five, are stumbling into the finish line and will need to regroup before the MAC Conference Tournament if they want to make a run to another MAC Tournament Championship.

For the Zips to win, they need to learn their lesson from the previous defeat to the RedHawks and accomplish three things. First, they need to protect the ball against Miami’s full-court pressure defense to limit the turnovers. In the last meeting, the Zips turned the ball over 20 times while consistently falling into the defensive traps of the RedHawks’. Secondly, the Zips defense will need to stiffen up to contain Miami’s junior Eric Washington, who leads the RedHawks at 14.7 ppg. Washington torched the Zips in the previous matchup, netting a game-high 21 points while making clutch baskets and free throws to clinch a victory for the RedHawks. Lastly, the Zips will have to improve their shooting drastically. The Zips struggled immensely from the field in their last meeting with Miami, shooting a dismal 32.2 percent from the field and a season low 21.9 percent from 3-point range. Look for the Zips to feed junior Pat Forsythe or Isaiah Johnson (Big Dog) down in the paint for less difficult shot attempts due to the height and weight advantage the Zips have over the RedHawks.

With only two more regular season games remaining for the Zips, they will need to win both along with some help from other teams in the MAC-East division to earn a first round bye in the MAC Conference Tournament. The Zips also can not overlook Tuesday’s matchup with Miami, with a nationally televised season finale with arch-rival Kent State looming.