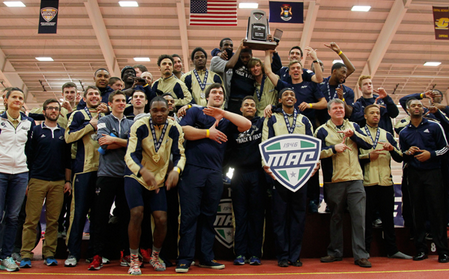 Men's track and field team after capturing the MAC title in Michigan.

Saturday, Feb. 27 brought an end to the indoor track season in Mount Pleasant, Michigan where the Zips showed up big and shined bright.

Both the men and women’s team competed fiercely and the Akron men took the top spot after coming up and stealing the first place finish in the last event of the day. The women’s team was edged out by the Eagles by three points.

The last honor the Zips claimed was Coach of the Year as head coach Dennis Mitchell was named an impressive ninth time.

“I am very proud of how both the men and women performed and stayed tough through so many hard battles. It was bittersweet between the men and women. The men did a great job coming from behind against a very hot Eastern Michigan team. It came down to the last event for both teams in the 4×400 relay. Despite our women running their best time of the year, they just came up four one-hundredths of a second short,” Mitchell said to the media after the meet.

This unbelievable comeback for the title went to the last event for the Zips, where a trio of sophomores, Miles Baldwin, Mike Ohiembor, Brent Grey and senior Sean Weems raced to the finish line first in the 4×400 relay which propelled the Zips to a first place finish.

Akron will now wait to for an announcement from the NCAA to see which Zip has qualified for the NCAA Indoor Championship which will be hosted by the University of Arkansas on March 13-14.