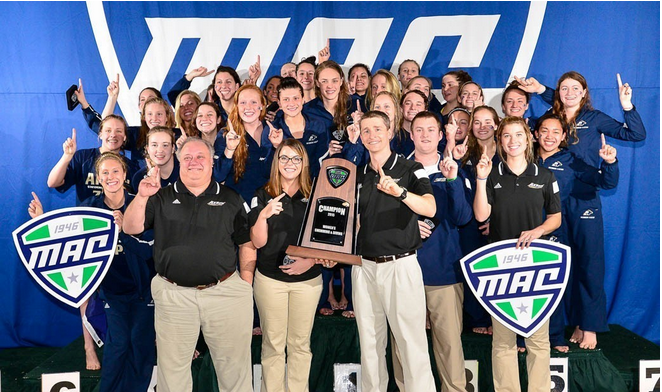 Akron's swimming and diving team after their victory in the pool.

The second year as Akron’s Swimming and Diving coach, Brian Peresie has led the Zips to back to back MAC Championship seasons.

Akron led the entire way through the four-day match at Eastern Michigan’s Jones Natatorium winning the championship with 650 points. The Zips earned eight individual postseason honors and Peresie was named the MAC Swimming Coach of the Year for the second-straight season with his and his team’s performance during the match.

“It feels great. I’m very happy for the team, the program and our alumni. It’s exciting to be able to come in and experience this, especially with what we experienced last year, it’s difficult to try and recreate something like that. We had our fair share of ups and downs, but I’m proud of how they attacked everything and how they handled the meet. We wanted to finish on top and the team did a great job,” Akron’s head coach Brian Peresie said to the media after the meet.

Akron will now prepare for the three-day LESI Championships, which will be held here at Akron in the Ocasek Natatorium in Akron March 6-8.