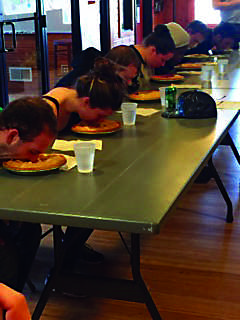 Students as they compete in the pie eating contest at silent weekend.

Freddy’s Silent Weekend attracted more than just The American Sign Language Association from UA, but professors and other schools as well.

Every semester Fred Palchick hosts a weekend for students, professors and deaf from all around to join together and enrich themselves in the culture of American Sign Language. These weekends include absolutely no speaking with the mouth, only the hands.

Universities across Ohio compete in this friendly competition. This year, there was a pie and cake eating contest, a deaf Q&A trivia contest, a scavenger hunt, and an assortment of other fun, yet silent, activities.

ASLA also decorated a Little Mermaid cake that went along with the Disney theme of the weekend.

“I’m glad to see that Akron’s turnout at Freddy’s Silent Weekend is so well, compared to the last two years we had to recruit,” said Steven Wyatt, an active ASLA member.

UA won the overall spring 2015 ASLA silent weekend competition. In celebration of this accomplishment, ASLA held a night of cake eating and group socializing on March 4 in the Polsky building.