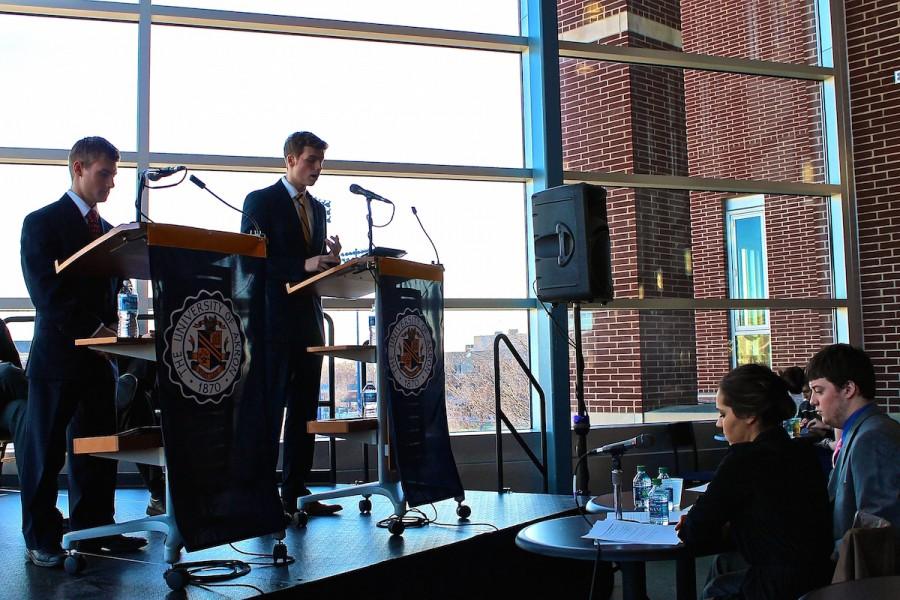 The two candidates for president are Garrett Scherba and Taylor Swift. Their running mates are Brandon Genetin and Ricky Angeletti, respectively.

Scherba and Swift agreed on most issues, saying the students are the ultimate source of USG decisions; therefore, students’ input is paramount.

“What will be your number one priority, or focus, if you win the election and become seated in the presidential position, as the official spokesperson for USG?” asked the moderator.

Swift spoke first, and based his response on his plans for contextual grading, student safety, and parking.

Contextual grading is different from UA’s current grading system; it basically provides ranks for the difficulty of certain classes, which would show on a transcript. Swift wants to implement this, if elected.

A new application Swift is trying to bring to UA is called “Parker.” This app shows how many parking spots are open around campus. Swift said the app is cheap, affordable, and—would be—beneficial for UA.

As for safety, Swift said: “It’s extremely important for us to focus on the safety around us…to make sure that we keep raising safety and raising awareness.” He mentioned his past success of putting in a safety light near McDonald’s on Exchange St.

Scherba answered differently, speaking of the importance of student engagement.

“I think where the university lacks is our ability to engage those types of non-traditional students…I want to see more pride in the university…people taking pride and advantage of the opportunities that the university offers,” Scherba said.

Scherba mentioned the more than 300 student organizations on campus, and the opportunities they provide to make students feel more at home at UA.

One of Scherba’s plans is for New Roo Weekend, where he wants to connect with the incoming freshmen to get their input on UA, and increase their involvement with USG earlier on. For Scherba, UA would inevitably improve alongside increased student engagement.

The other issues for the debate were agreed on by the two candidates. They each promoted transparency, accountability, and leadership. Their vice-president running mates debated afterward, expounding on what the presidential candidates said. They too concurred on all of the issues.

“I think the debate was actually fairly successful,” said current-senator Chris Serio. “Both candidates tackled the major issues of retention and apathy from the students.”

“They connected with the audience,” Hench said. “You could tell they put a lot of thought and effort into research beforehand.”

The new president and vice president do not get sworn in until May 1. Their duties start in the summer, working with logistics and student organizations. They must attend leadership retreats at this time as well.

11 candidates for USG senate positions were also present; however, they did not debate. Their information was displayed on a TV screen in front of the debate podiums on stage.

Candidate information—including qualifications, previous work and experience, and policy goals—can be found on <http://www.uakron.edu/vote/>. Voting begins Thursday, March 12 at 8:00 a.m. and ends Wednesday, March 18 at 5:00 p.m. Students will receive an email on their Zips account with a link to the voting ballots.