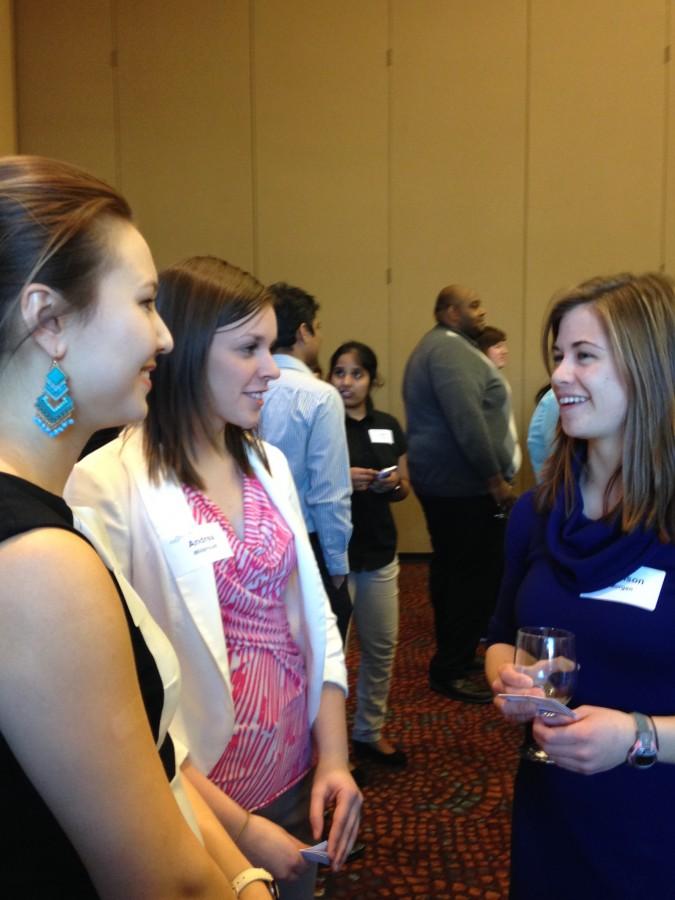 Students take the opportunity to meet and greet with employers at the Etiquette Dinner.

Students and employers came to the Union Ballrooms last Thursday, March 12, to learn and practice the essentials of dining and social etiquette.

“Students are remaining eager to attend the Etiquette Dinner,” said Laura Cessna, assistant director of UA’s Career Center, in an email response. “This year, we saw a tremendous increase in attendance…The event sold out by the deadline date.”

Upon arrival, students checked in and received their personal business cards. Last semester’s Etiquette Dinner had business cards as well; however, students had to handwrite their information.

After registration, students could network with employers in the rightmost ballroom area. Swagelok University Relations Specialist Uma Ricco gave a speech on first impressions, in which she said the most important thing to keep in mind is one’s “mode of communication,” and that active listening is far more important than speaking.

After the networking session came the formal dinner; every student and employer gathered in the main ballroom to sit and eat. Each table had one or two employers and five or six students.

Assistant Director Cessna guided students through the first part of dinner, giving tips and directions on how to properly dine.

Cessna emphasized such rules as: working from the outside to the inside with silverware, keeping drinks above and to the right of food, keeping bread above and left, passing food to the right, being courteous, and placing silverware at a 4-o’clock position on the plate when finished with the food.

Cessna then gave the floor to Kevin Smith, Director of Student Leadership Initiatives. Smith spoke on how to responsibly use social media, the disadvantages of being too flexible, and how to promote oneself as a brand. He used an anecdote about the popularity of BMW in the U.S., and how the company has created a desired image of itself.

Though the Etiquette Dinner was beneficial for anyone looking for employment, it also called into question the Millennial Generation’s possible lack of such knowledge.

“I don’t think this generation is necessarily lacking etiquette, I just think there is a constant need to be more self-aware. There’s always a need to be learning…of social norms and [social] miscues,” said Uma Ricco.

“I think there is a disconnect with our generation,” Costa said. “I think that we come to college and we expect to immediately transition from the classroom to the corporate world without realizing the steps in between…we might not realize that there are middle steps we have to be proficient in.”

Towards the end of dinner was a fashion show, where students posed on stage in clothing ranging from business formal to business professional to business casual and casual. To show contrast, students were brought on stage who wore both acceptable and unacceptable outfits.

At the end of the night, students were given blank postcards, presumably to send to the employers they talked to during dinner. The postcards served as a cap on the night—a final emphasis on the importance of courtesy and etiquette.