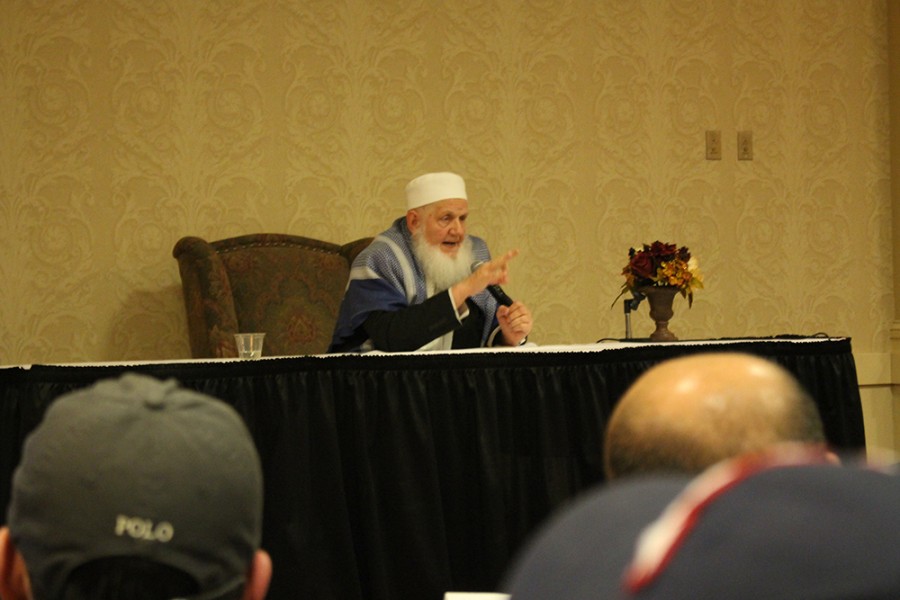 Yusuf Estes spoke to an audience of over 800 people at Quaker Square.

The University of Akron’s Muslim Students Association presented a lecture by renowned preacher, Yusuf Estes. This event was held on Thursday, March 12 from 6 p.m. to 8 p.m.

Almost 800 people from the surrounding Akron area filled the Quaker Station to see Estes’ lecture. Estes centered his presentation around the question, Is Islam a religion of peace? He also confronted the question; can you still be in peace when you don’t get what you want?

Estes, previously a Christian, converted to Islam in 1991. He is well- known for his preaching, and being a guest presenter and keynote speaker at various Islamic events. He is active in Islamic missionary work in the United States and he also served as a Muslim delegate to the United Nations World Peace Conference for Religious Leaders, which was held at the U.N. He is also the founder and operator of America’s first Islamic channel, “Guide Us TV”.

Israa Eddeb, MSA president said, “It was a nice surprise because he is a well-known speaker. We were lucky to have him because he doesn’t work with small organizations.”

Estes used humor and informality to make the audience in the room feel comfortable and welcoming for the other non-Muslim audience members.

Eddeb said, “He likes to accommodate to the audience and add ice breakers here and there. He doesn’t like to be too tense and likes to have a conversation when he is speaking.”

Estes educated the audience on the basics of Islam, which is the “world’s largest growing religion that believes in God,” Estes said. The Arabic word Islam has no direct translation. As stated by Estes, the best way it can be translated are with the words: surrender, submit, obedience, sincerity, and peace.

Multiple times in the lecture, Estes directed his speech directly towards women. He emphasized to the men about how much women really go through, especially during childbirth. Moreover, he confronted the issue of women and societies expectations of women. “We don’t see the real picture, but you need all the facts,” Estes said in his lecture.

Eddeb said that that the MSA tries to host events geared towards non-Muslims and Muslims. Eddeb continued by saying a week before this event happened, the local Akron and Kent Mosque approached the MSA asking if they wanted to host this event.