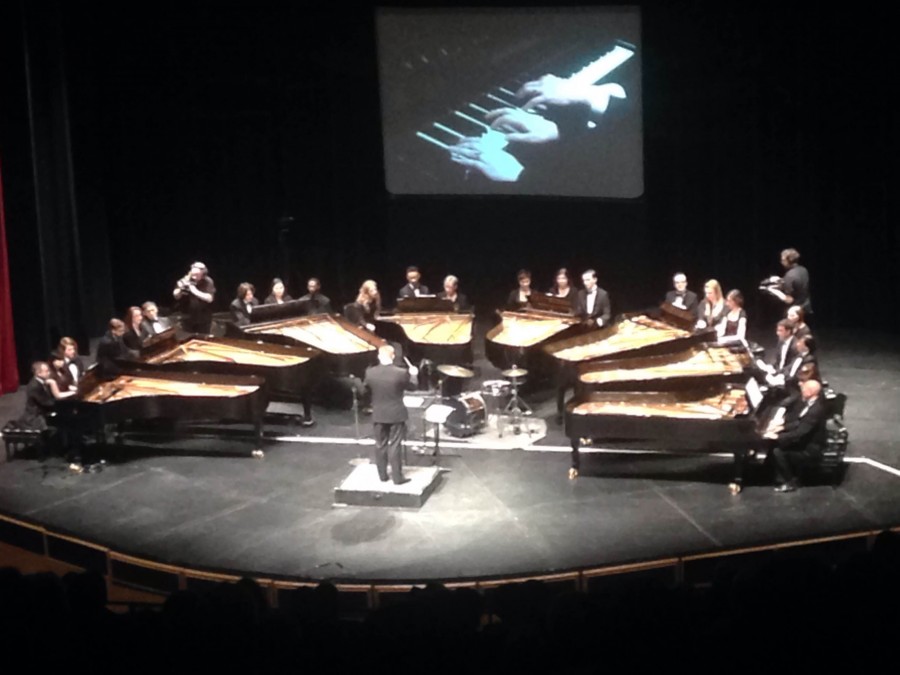 Galen Karriker leads the arrangement in "Rhapsody in Blue."

Music filled the air on Sunday, March 15 at E.J. Thomas as 39 pianists showcased their incredible talents at MonsterPianos! It was billed as a piano recital, but it was presented on a much larger scale.

Eight grand pianos were arranged in a semicircle onstage with multiple pianists playing simultaneously, which made for a truly unique experience. Musical selections ranged from classical to jazz to big band, and left audience members tapping their toes and swaying in their seats.

One of the more interesting selections included two pianists playing an elaborate classical piece together, which elicited a standing ovation from the audience. The University of Akron fight song was also played as an homage to our beloved Zips.

Founded in 2006, MonsterPianos! was created by Philip Thomson, a UA music professor. Thomson was inspired by Eugene List, who was famous for “Monster Concerts,” which include up to 10 pianos onstage.

Thomson also organized the show with help from Mayumi Kikuchi, a fellow faculty member. The show is conducted by Galen Karriker, who is also UA’s director of bands, and a professor in the UA’s School of Music.

Many of the performers are UA music students themselves, and bring an immense amount of talent and experience to the show.

“I had a great time. It was crazy seeing how many people could fit on the pianos, Samantha Hickey, UA student, said. “My favorite performance was Rhapsody in Blue.”

Selections performed during the show included classical works by Beethoven, Bach, and Bizet, alongside some jazzier selections and even “In the Mood,” a big band number by Glenn Miller. Monster Pianos! truly offered something for all ages and music interests to enjoy.