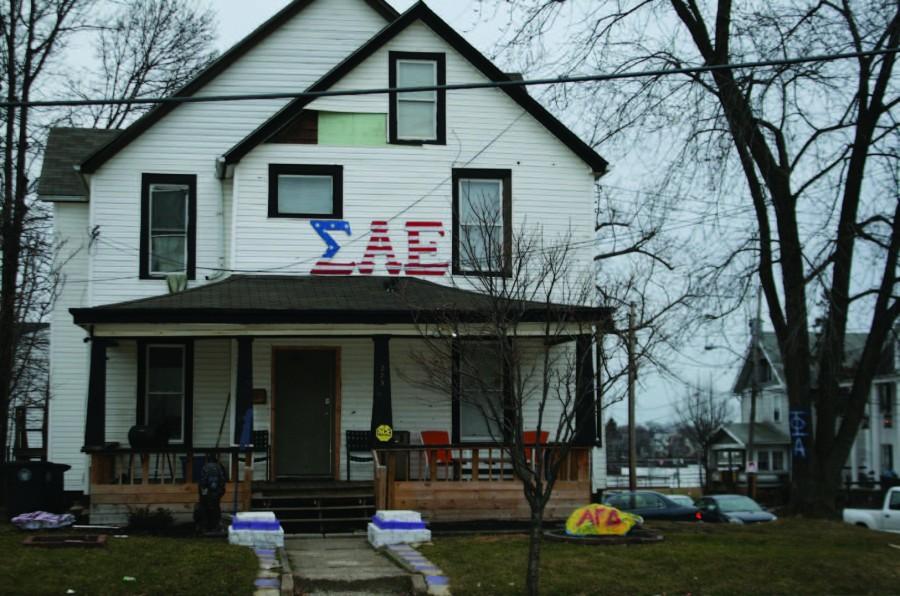 UA's chapter of SAE is located on the corner of Vine St. and Spicer St.

A student has filed a federal lawsuit against UA’s Sigma Alpha Epsilon (SAE) fraternity chapter, several of its members, and several UAPD officers in connection with a fight at the fraternity last year.

According to the lawsuit filed in U.S. District Court, Gabriel Dorsey went to a party at the SAE house on Feb. 2, 2014. His friend, Larry Goodman, who was a member of SAE at the time, invited Dorsey. Both are African-American.

Multiple accounts have been filed on what happened once Dorsey was at the party. Regardless, a fight broke out between Dorsey and several of SAE’s members, including Brandon McWayne and Nicholas Weisand. Both are white.

In a report filed with the UAPD soon after the event, SAE’s president at the time, Logan Boggs, also white, said Weisand was “confronted by an uninvited guest.”

“The suspect approached Nicholas as Nicholas turned away and struck him in the mouth with a right handed punch,” the police report says.

Both Weisand and McWayne went to Akron City Hospital for their injuries. Weisand had two teeth knocked out.

Dorsey was arrested at the police station in the morning. While there, he gave his account of what happened, which contrasts with that of the SAE members. He said the fight began when Weisand was “pushing a female,” according to the report.

Dorsey said this female was unknown to him, and when Weisand would not stop pushing her, he intervened in her defense.

The report also says—according to Dorsey—he fled with another person named Dennis Haggins after the scuffle, and that Haggins was the only person Dorsey was with.

Dorsey left the debacle with injuries to his right hand, which came from punching Weisand in the face, he told police.

On Feb, 11, 2014, a Summit County grand jury indicted Dorsey on two counts of felonious assault. Dorsey was subsequently suspended from UA for one year.

In September of 2014, a Summit County Common Pleas jury acquitted Dorsey of both counts. Dorsey returned to UA in January.

In his lawsuit, Dorsey accuses SAE, its members, and the UAPD officers of false arrest, two counts of malicious prosecution, abuse of process, and assault and battery.

Dorsey is requesting millions in compensation, and says events following the February altercation “have been perverted to attempt to accomplish a racially motivated purpose.”

The account of the altercation in the lawsuit is different than what was originally stated in the police report, however.

In the lawsuit, Dorsey claims that Weisand “began touching [Dorsey’s] girlfriend in a sexually inappropriate manner.”

“[Dorsey] confronted Weisand and Weisand became belligerent and punched [Dorsey]…[Dorsey] defended himself and was immediately attacked by a score of SAE brothers,” the lawsuit says, “…being called all kinds of derogatory names and racial slurs.”

The filing of the lawsuit on Friday came less than a week after an University of Oklahoma SAE chapter was seen making racist chants in a video.

In an emailed statement, the current SAE president, Brandon Johnson, said “The Brothers of [SAE] at [UA] do not condone discrimination of any kind…we firmly deny any racist act against any individual or group.”

Larry Goodman, the SAE member who originally invited Dorsey to the February SAE party, is no longer an SAE member.

The lawsuit says Goodman left SAE because of its racist behavior. Johnson, however, says SAE voted to expel Goodman for many reasons, including his “inability to make the minimum GPA…his lack of attendance at chapter events…and because of his inability to meet financial obligations.”

Walter Madison, Dorsey’s attorney, had little to say about the case on Monday.

“Twelve people who heard all of the evidence that are high of burden of proof disagree,” Madison said, referencing the contrast in accounts.

Madison was referring to the jury that acquitted Dorsey in September.