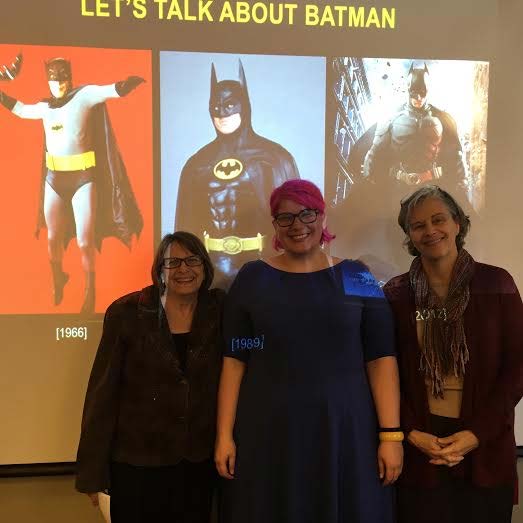 On Wednesday, March 18, Doctor Kara Kvaran presented “Super Daddy Issues, Masculinity, Fatherhood, and Superhero Films” on the 4th floor of Leigh Hall. The roughly 40 minute lecture was part of a series of lectures aimed at addressing and redefining gender stereotypes.

The conference room in which the presentation took place filled with students. Many struggled to find seating and late arrivals were forced to stand. Both Dr. Kvaran and Dr. Kathryn Feltey, the intern director of Women’s’ Studies, acknowledged that this was the highest attendance they had received this semester.

Kvaran began with remarks on the similitude between the origins of various superheroes. They’re almost exclusively orphans; Kvaran was hard pressed to find contrary examples. Furthermore, she asserted that more often than not, these superheroes nearly always have “daddy issues.”

She relayed her experience with “Man of Steel,” the latest movie about Superman and the film that inspired her research on the topic.

“I got obsessed with this father story stuff that was happening and I actually got a pen and piece of paper out and started taking notes right there in the theater. And people were looking at me like I was a crazy person but I was like ‘No! Daddy issues! They’re all over superhero movies’,” Kvaran said.

The films’ opening 30 minutes and exposition are delivered during an exploration of Superman’s father, Jor-el, who ultimately convinces Superman to protect the Earth and serves as his sons’ primary influence.

Kvaran compiled a list of 81 superhero films for her study. After watching every film, Kvaran incorporated the work of Joseph Campbell, author of “Hero with a Thousand Faces,” in which he discusses the story trajectory present in most tales of heroes in classical mythology, to create a “Modern American Mythology.” These stories, as a rule, contain a reckoning with a father figure, whether it be a reunion or defeat of the father figure. Kvaran used Star Wars as an example.

To contrast, Kvaran expounded on the rise of “Momism” in 1950s popular culture, the time in which superheroes were first gaining traction. “Momism” refers to the demonization of strong mothers and the subsequent glorification of powerful men.

“So if a boys’ best friend is his mother, he’s a psycho Norman Bates Serial Killer,” Kvaran said.

Kvaran was intrigued by these themes which have cropped up in the recent spate of superhero movies but acknowledged that she couldn’t possibly cover that much material.

Accordingly, she came up with a three-pronged test to determine if someone was a superhero: First, they have to fight for good. Second, they have to have a disguise or secret identity. Third, they must have “super” or special powers.

A character must have two of the three attributes to be considered a superhero in her study.

Her slide “The best way to be a superhero is to be a blonde white guy named Chris” drew laughter from the audience. It contained shots of Chris Hemsworth as Thor, Chris Pratt as Starlord and Chris Evans as Captain America. Kvaran discussed how this heteronormative, young, white, masculine ideal had become a standard in the superhero genre.

In the movies studied, there is a 3:1 ratio of men to women in speaking roles and 73 of the 81 movies in the study starred white men. Only five of the movies had female protagonists.

The overwhelmingly white, straight cast was discussed and paired with the trend of powerful father figures seemingly required in these movies. These fathers are dominant and impressive figures whose love must be earned. In contrast, the mothers are treated as accessories whose love is unconditional and who themselves focus on the father.

The lecture was extremely informative, eventually touching on the replacement of female characters in favor of males, the damsel in distress, Batman’s move towards masculine focus, and the future of superhero movies.

After the lecture, Kvaran said, “I love superheros. You could get me talk about it any day of the week and I’ll be like ‘Yeah!’ I think it went really well.”

Several audience members attended for credit in their classes and had been to related lectures like “Bullying” and “Gender in the Workplace.”

Students who wish to learn more may look into other events included in the Rethinking Gender Spring series and can find more information at https://www.uakron.edu/itl_seminars.