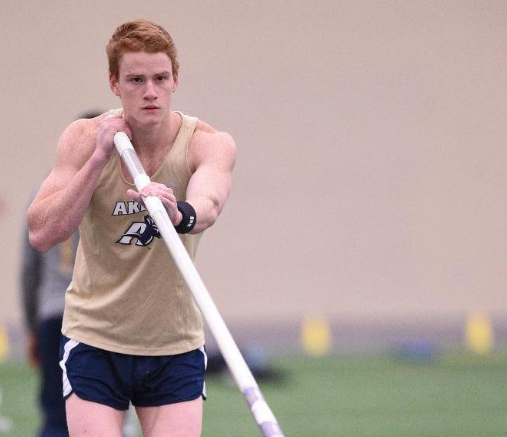 Shawn Barber before his vault.

Student Shawn Barber has been named one of the six finalists for the prestigious 85th Annual Sullivan Award. Barber is a pole vaulter for the Akron men’s track and field team.

The Sullivan Award has been around since 1930 and has been awarded to noticeable names like Tim Tebow, Peyton Manning, Michael Phelps, Glen Davis, Michelle Kwan and countless of other great American sport figures. The Sullivan award has been dubbed the Oscar of the sports community since it is the highest honor an athlete can achieve in their amateur career. The award is given to amateur athletes for outstanding performances throughout their individual season and sports in the United States.

The decision process to name the player of the year begins with 14 nominees that fans can vote into the top six. The top six will go to an award ceremony where they will be named and honored with the award. Barber started the competition beating out athletes like the 2014 Heisman winner quarterback, Marcus Mariota from Oregon University, Micha Hancock, a volleyball player from Penn State University and Haley Ishimatsu, a diver from Duke.

“It’s a great honor for me to be named a finalist for the Sullivan Award. This feat in itself feels like quite the accomplishment for me, and I know I couldn’t have done it without the efforts and support of the staff at The University of Akron as well as my family, friends, and amazing fans,” Barber said to the media.

This season, Barber has performed above the call of duty as he has won every competition he has entered, clearing at least 19 feet in all but one competition, as well as clearing a NCAA record earlier this year of 19-3.5 (5.88m). Barber has also broken his own record in the MAC conference championship when he claimed his fifth title in the MAC track and field championships. Barber has also defended his title in the NCAA Championships by clearing a jump of 19-4.75 (5.91m). In this season, Barber is one of two collegians to jump over the 19 feet mark and trails only one jumper in the world, the 2012 Olympic gold medalist, Renaud Lavillenie of France who has cleared 6.02 meters.

Voting closes on Wednesday, March 24 and Barber will need the help of Akron again to win this prestigious award. This can be done by visiting aausullivan.org or aausports.org, where voters can vote once a day and polls are open for family, friends, and Zips everywhere. Supporters can then log on to any social media sites and share a vote for Barber by using the hashtag #RASINGTHEBARber.