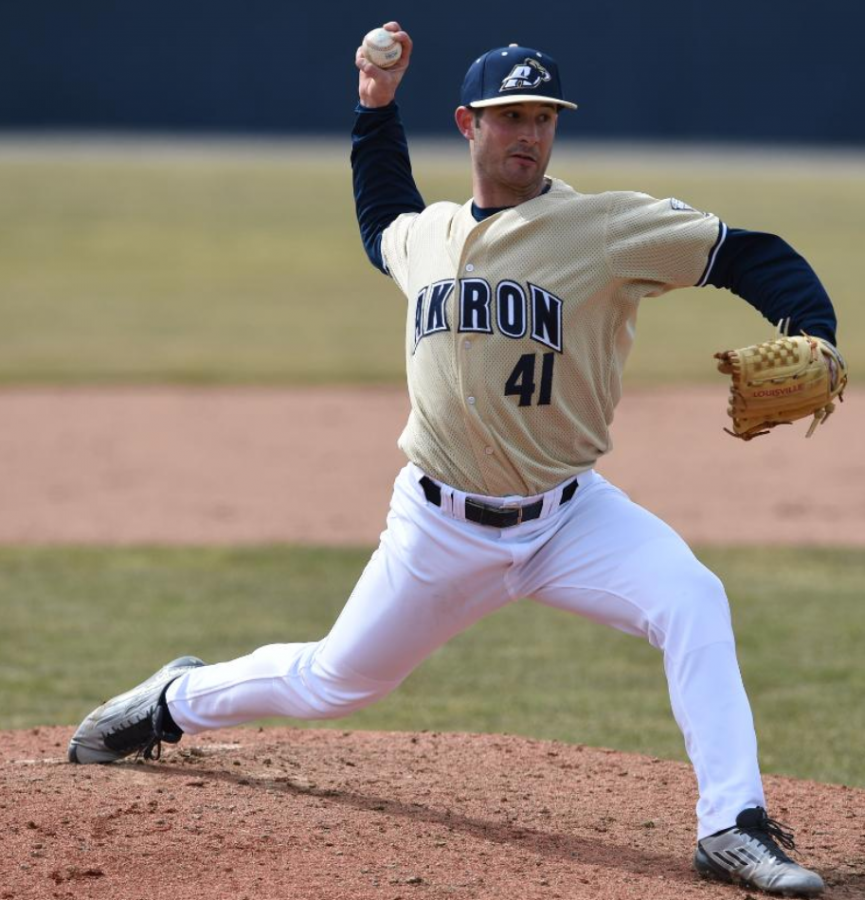 Former Zips pitcher Zak Knettel at the mound prior to the dissolution of Akron's baseball team following the 2015 season. (Photo courtesy of The University of Akron Department of Athletics)

The Zip’s Baseball (12-13) team played in three games this past weekend. They opened up their weekend Saturday, March 28 with a game against Toledo (9-16). The Zips fell short and lost to Toledo with a final score of 3-2.

Both Akron and Toledo remained scoreless until the sixth inning when Toledo was able to score a run. In the last inning, both squads pushed up the score with two runs each. Zip’s Pitcher John Valek III threw for eight innings and allowed only three hits. Valek reached a career high of 10 batters and allowed one walk in the game. Zach Beaver, also a Zip pitched the ninth inning, allowing the two hits and two runs which lead the Toledo Rockets to victory.

In game one, the final score was 10-1 in favor of the home team, Zips. JT Brubaker pitched the entire game and had a career high of seven strikeouts while giving up two hits and two walks to the Toledo’s offense. Sophomore Brain Lees hit an impressive 4-4 (100%) at bat and finished the game with a run and an RBI. Senior Matt Rembielak had three hits and scored twice during his four at-bats. Junior Kris Simonton had a game high of two RBI and a two run double in the fifth inning to take the score up to 5-0.

In game two, Akron once again defeated the Toledo Rockets with a final score of 2-0. Pitcher Joe Pusateri earned his third win from the mound while finishing the game with a career high of seven strikeouts. Pusateri allowed six hits and with no walks in the 29 batters he faced during the game. The scoring for Akron started in the second inning as Lees had a single RBI. The final score came from Dom Iero, who scored for Akron in the seventh inning. As a team, the Zips had five hits and only one error in this low scoring and highly contested game.

Akron will take the field, Wednesday, April 1 as the team travels to Buffalo, N.Y. to take on the Golden Griffins of Canisuis College (11-15).