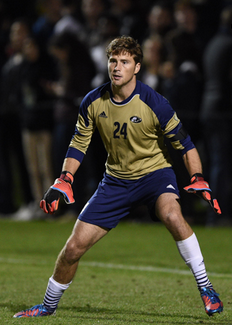 Jake Fenlason preparing to stop the ball from scoring.

On Saturday, April 4, Akron traveled south to Kentucky to continue their spring exhibition schedule against Louisville.

The two red cards were issued during the first half of the game, one in the ninth minute and again right before half. This meant the Zips were down two men, out of 11, for the whole second half of the game.

“We put ourselves in a tough situation today going down two men. We have to keep our heads better, we want to play hard and went a bit overboard early on. We have to learn that line, but when the game settled down we were excellent showing toughness and resiliency,” UA’s men’s soccer head coach, Jared Embick said to the media.

The first score came from the Louisville squad in the 12th minute and during the 22nd minute Akron’s Richie Laryea responded in kind.

During the second half, Akron, down by two men, shifted to a more defensive minded game and limited shots by the Cardinals offense. The game ended with a tie score.

Akron will now prepare for a double header match at home, Saturday, April 11 when the Zips will host Butler and Notre Dame College. Kickoff for the first match will be at 5 p.m., while the second match has a 7:30 p.m. starting time.

Side note: Over the last eight years these two squads have been among the best when it comes to men’s collegiate soccer. The Cardinals are a squad who, over the span of eight seasons, have posted a record of 105-45-23 and have finished each season going to the College Cup since 2007. During that same span of eight seasons, the Zips own the best winning percentage in the nation at 82 percent with a record of 140-23-19.