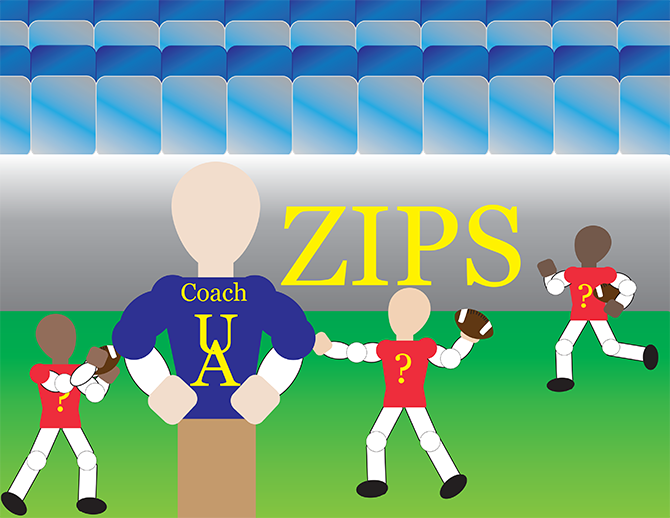 What do Ohio State and Akron have in common as they begin spring football practice?

Quarterbacks, or rather, both teams have too many.

Before either team gets set for their debut in late summer, the quarterbacks from both schools will have to beat out their teammates.

While there is plenty to look out for on both teams, the Zips especially are set for an early prediction of finishing first in the East Division and possibly an 8-4 finish for the team. However, a three-way competition will first decide which young man gets to lead the team to victory.

“To me, I want to see the quarterback position evolve a little bit better to a clear, vocal leader. Not one that has quiet leadership skills, but I think that needs to come out a little bit more for all of our quarterbacks. That’s one key thing we’re looking for. But I’ve had some awfully good quarterbacks—because poise and laid back and calmness and those things are part of the position— but I do believe there is an element of vocal leadership that we need to get out of that position as well,” Head Coach Terry Bowden said to the media.

Pohl, who started for UA the last two consecutive years, has been described as a “next level” quarterback by coaches and analysts alike, suggesting that he has the capabilities of playing in the NFL. However, Pohl’s performance this past season dropped, throwing for 2,100 yards in 2014, which is about 300 yards fewer than his 2013 campaign. This can be explained partly by Pohl missing two full games with a concussion and having a shoulder injury during the latter half of the season. Pohl also saw a decrease in yards per completion, from six to 5.7 as well as a drop in his QBR (quarterback rating) which dipped to 35.1 after being 46.2 in 2013. At the end of the 2014 season, Pohl’s QBR ranked him 13th worst in the country.

On behalf of Pohl, Bowden said, “Pohl has a lot of playing time and he’ll have a lot of experience that will be hard to overcome.”

Chapman committed to Pitt out of high school as a four star recruit according to ESPN. Chapman then left Pitt after an altercation which led to his suspension. He then spent 2013 at Ashland before transferring to Akron. Chapman appears to be the guy who has the best chance to “overcome” Pohl’s experience. During his time at Ashland, Chapman completed 52 percent of his passes and had 1,154 yards in nine games. His best performance was against conference foe, Malone, where he threw for 235 yards and completed 64.5 percent of his passes.

“Chapman is a highly-recruited local quarterback with the ability to run and throw,” Bowden said.

Woodson replaced Pohl in eight games last year and has the ability to compete according to Bowden, but is taking third-string reps during spring practice. For the 2014 season, Woodson threw five touchdowns and six interceptions, but did provide a running threat at times. He highlighted this in the Eastern Michigan game where he broke off a 40-yard run and the Ohio game where he ran for 40 yards on four attempts.

Despite this, Woodson sported an adjusted QBR of just 21.0. Woodson does have a higher completion percentage at 53.1 percent but the action Woodson saw in the Howard, Marshall and Eastern Michigan games were all late in blowout games and often against second-team defenses.

Bowden says he is looking for a quarterback that can “take the offense from the huddle to the end zone, [while having] both the tangibles and the intangibles to lead the team.”

Stay tuned to see who will get the nod from Coach Bowden and take the starting snaps behind center during the spring game on Saturday, April 18 and during the season opener when the team travels to Oklahoma Saturday, September 5.