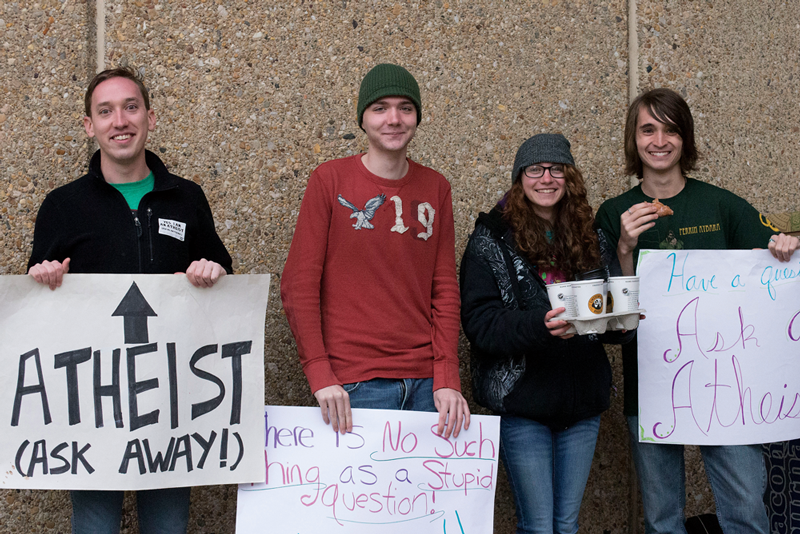 Sipping Einstein Bros coffee and holding handmade “Ask an Atheist” signs, a group of students stood in the rain last Thursday, April 16, to discuss the existence of a god.

It was “Ask an Atheist” day, put on by members of UA’s Secular Student Alliance. Members gathered outside Bierce from 10 a.m. to 5 p.m. last Wednesday and Thursday to educate others about atheism.

SSA provides a community for atheists, agnostics, humanists, skeptics, and all those who are questioning their beliefs. The group organizes activities including discussions, movie and documentary showings, guest speakers, and debates to educate UA students, according to its Facebook page.

Shauna Lachendro, vice president of SSA, said not everyone in the group is an atheist.  She said it is a secular club, not an atheist club, meaning its members believe in the separation of church and state, and that religion should not be forced on individuals.

Though not many students stopped to ask questions, the group was welcoming to those who did; SSA members patiently answered each student’s questions.

One member, who brought donuts for the group, offered a student one by joking: “Would you like an atheist donut?”

Jason Wenneman, an SSA member, said the group accepts anyone who holds secular values. Lachendro said SSA includes Christians, one Buddhist, and a handful of “ex-Catholics.”

Jon Tucker, a mechanical engineering student, has been in SSA since last semester. He said he is taking part in the “Ask an Atheist” event because there are misconceptions about what it means to be an atheist.

Tucker said there are not many atheists in the country, and “that plays into these misconceptions.”

A common question Tucker received was: “How could you believe this?” The oddest question he was asked, according to him, was if he worshipped the devil. To this question, Tucker responded with: “No, we are not devil-worshippers, we’re very friendly people.”

Dasha Smith, a student, asked SSA: “What do you believe created the universe?” The SSA member who answered the question took to a scientific explanation of the creation of the universe.

Smith said she appreciated that the group was willing to answer student’s questions in the rain.

“We’re looking to remove negative stigma,” said Matt Marton, a newer member SSA. Marton said the group is not forcing its beliefs on other students, but just trying to make people think.

“Its a good idea to bring the conversation of religion into the open,” said Ryan Fink, a philosophy major. Fink added that “Ask an Atheist” is a positive way to talk about religion “without fear of being made fun of.”

SSA Vice President Lachendro said the group got positive feedback. She said there were many students who stopped by who were atheists, but afraid to join the group due to the backlash.

One student walked past the group, shook a member’s hand, and said: “You guys are all awesome!”

Lachendro said in the upcoming weeks, SSA is planning another event where students can hug an atheist, agnostic, or a humanist.  She said this is similar to the “Hug an Atheist” event SSA put on in previous semesters, but different in that students can “hug whatever they believe.”