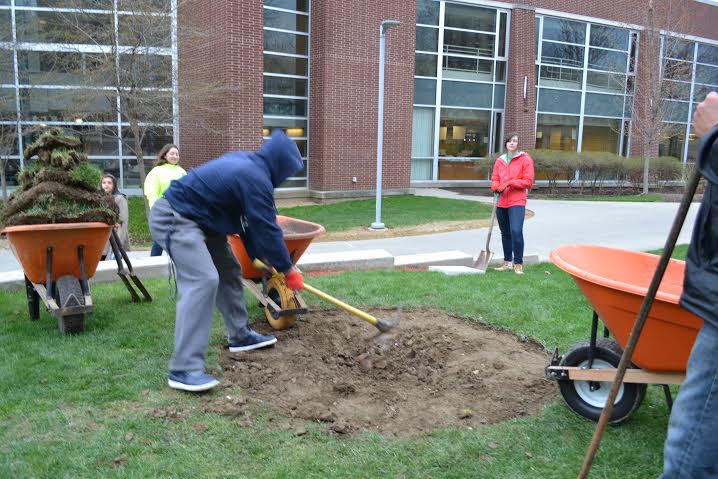 In honor of Earth Day, a tree was planted outside of the Union by the Honors Complex and Orr Hall Government from Residence Hall Council and Brian and Company from Tallmadge Landscaping Company.

Travis Pero, president of Honors Complex and Orr Hall Government from RHC said, “Were hoping to do this really just in recognition of Earth Day, to hopefully spread a little bit of awareness. In some ways, to give back to the community and give back to the earth. We’re really just trying to leave a lasting mark on the university.”

This is the first year that the RHC has done something like this. According to Pero, the location was allotted to the RHC, however, they chose to plant a tree there because it is a high traffic area, “Where our message and efforts would be seen by the maximum number of student faculty and staff.”

The HCSG received a contribution from The Ohio Beauty Cut Stone who donated the stone plaque to commemorate the tree. Brian and Company provided the transportation for the trees, tools, and assistance.

Every year on April 22 Earth Day is celebrated globally.

According to the United States Environmental Protection Agency website, in 1970 Earth Day was created by Senator Gaylord Nelson and the Congress. This mainly started after a destructive oil spill wreaked havoc in Santa Barbara, California in 1969. Senator Nelson wanted to raise awareness about air and water pollution. He also wanted to make environmental protection a part of the nation agenda.

Earth Day is now recognized in 192 countries each year.