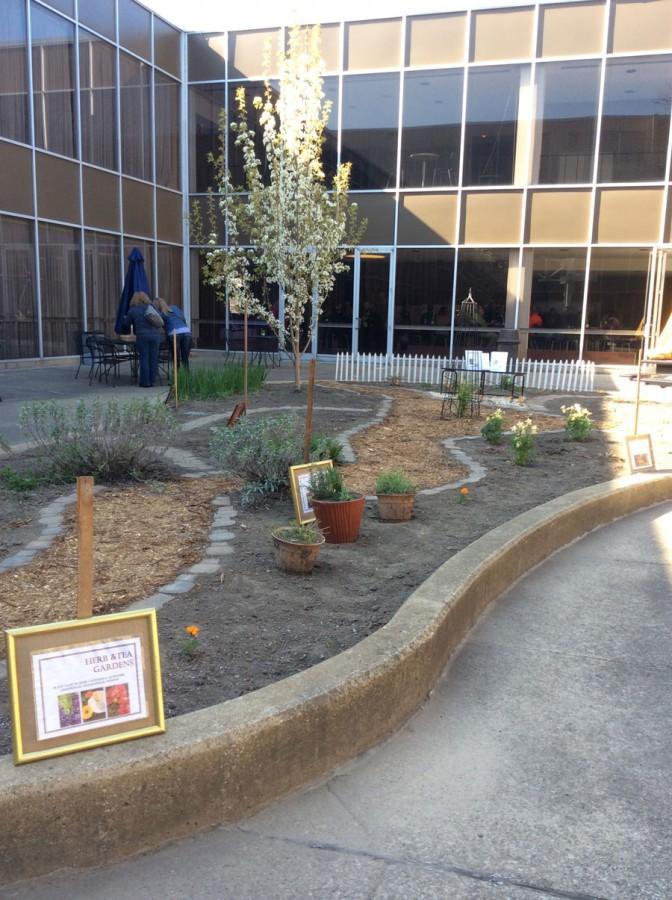 The herbs and tea garden located by Schrank Hall South

The School of Nutrition and Dietetics hosted a Garden Party to celebrate the 40th Anniversary of the Dietetic Program in the Schrank Hall South Culinary Garden on Friday, April 24.

The Didactic Program started in 1967 and the Garden Party commemorated the 40th year of the coordinated Dietetic Program, which means students are involved in internships along with classwork. The programs prepare students for board exams which allow them to become dietitians.

Alumni from the past 40 years were invited to the gathering, as well as faculty, students and “anyone who basically touched our program,” said event chair Dawn Scott.

“We’re hoping to generate some garden donor support as far as the alumni,” Scott said.

The event had a slideshow of previous alumni, healthy catering options, a UA band playing steel drums, and an appearance from Zippy.

This event also showcased the Schrank Hall South Culinary Garden, which was recently transformed with the help from Meenal Harankhedkar. She has two master degrees in horticulture and botany, and previously worked in California’s botanical gardens.

Harankkhedkar approached UA to volunteer her skills to reinvent the space.

“When I saw the space online I saw that it was used for the kitchen labs but I realized it needed something visual to draw people  in. We’re going to put in some visual plants to get people excited to come in and see the vegetable plants. It also provides hands on learning,” Harankkhedkar said.

Scott said that they want the garden to have community programs. They already work with high schoolers and they have children from the day camp who come once a week.

“Theres going to be a children’s garden. My daughter loves running on the bricks. My idea is to have people go inside and actually walk through it  and go home and say you can do that with your garden,”  Harankkhedkar said.

She wanted to create something easy which other people could re-create at their house. “I didn’t want it to be complicated,” Harankkhedkar said.