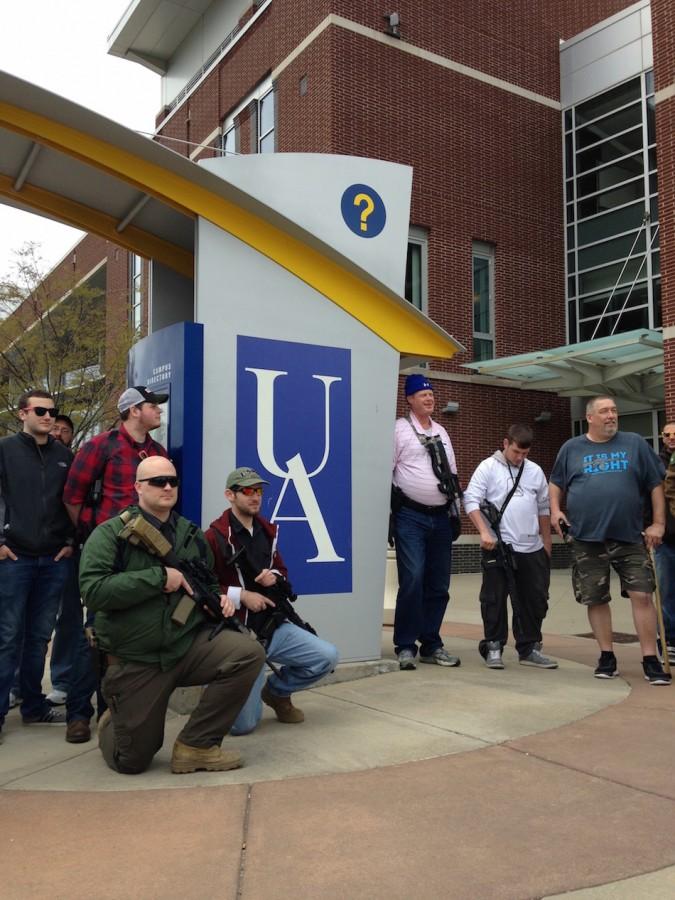 The advocates stopped for photos three times: The UA circle outside the Honors Complex, the Union, and Lock 3 Park in downtown Akron.

In the printed version of this article, which was published on April 28, 2015, Jeremy Krantz was referred to as an “ex-Marine.” The Buchtelite recognizes this mistake—that “ex-Marine” is an incorrect term, and that it was unacceptable to be published. Jeremy Krantz is a Former Marine, not an ex-Marine.

It wouldn’t have seemed as if 42 people—most of them openly-wielding long guns and handguns—walked through UA’s campus and into downtown Akron on Saturday. But they did.

“I mean, you could shoot a cannon through any selected street in Akron and not hit anybody,” said Jeffry Smith in a phone conversation after the event. “…there’s nobody, goodness gracious there’s hardly any traffic.”

Smith, a gun-rights advocate from Cincinnati, organized Saturday’s Open Carry/Firearm Education Walk. He says his goal was to get people talking about guns and gun laws, especially on university campuses, where it is currently illegal to conceal-carry firearms. Smith says this law turns universities into “criminal empowerment zones.”

The group met at 1 p.m. in Lot 27—the open lot between E.J. Thomas Hall and the North Campus Parking Deck. Out of the 42 people there, about 11 UA students and several UA alumni participated.

“The way that gun rules are set up at [UA], it’s not even safe for anybody to even carry an open one, because then we become targets. We become harassed,” Krantz said. “Me openly carrying is something that’s going to scare people.”

Evan Dickerhoof, a sophomore mechanical engineering student in the national guard, agreed with Krantz; however, he said it isn’t a person’s fault when they get scared.

“You can’t blame them,” Dickerhoof said while adjusting his custom-built AR-15 rifle in Lot 27. “It’s just how the generation has been raised.”

“I mean, I got a couple looks…a couple people asked questions…but people weren’t really concerned, even though most of them thought I was carrying a gun,” McEndree said.

But this time, McEndree was carrying guns—a handgun on each hip.

Culross then explained why prohibiting concealed carry on campuses is dangerous.

“If someone comes to campus with criminal intent, and they get to the edge and see a gun-free zone sign—they’re not going to snap their fingers and turn around like ‘oh, darn’,” Culross said. “But if there are students on campus who are armed…there is an opportunity to stop the threat.”

The group began walking toward the UA School of Law building around 1:30 p.m. It turned left near the Polymer Building, walked down UA’s main brick pathway, took another left near Ritchie Residence Halls, passed Rob’s dining hall, and eventually stopped in front of the UA circle outside of the Honors Complex for pictures. At that time, only a few people were seen on campus.

After taking pictures near the Union, the group walked alongside the Lee R. Jackson turf field to Exchange Street, where most of the walk’s interaction occurred. Walk participants would calmly explain their purpose, their beliefs, and the current gun laws to most passers-by.

Heaven Tarr, a UA student, saw the group on Exchange Street, but didn’t think much of it.

“I’m not scared because there is no initial threat,” Tarr said. “They aren’t coming up to us in a threatening manner.”

“I feel like [carrying a gun] is a student’s own form of protection…and I want to be able to defend myself,” Tarr said. “We are left defenseless on campus [without concealed carry].”

“It’s scary on a campus because students have a lot of stress and other emotions going on, so a gun is a powerful weapon to have during times like that,” Claytin said.

After walking up and down Exchange Street and taking a lap around some buildings, the group stopped at Penn Station for lunch. It was around 2:30 p.m.

Logan Brisbane and Michael Gotti, both chemical engineering students, watched the group from across Exchange Street.

“I didn’t really think anything of it,” Brisbane said about his initial reaction. Gotti agreed, and added his thoughts on the concealed carry law.

“I’m in favor of what they are [advocating],” Gotti said. “I feel like concealed carry should be legal on campuses. But I think what they are doing is more of a political statement—openly carrying around a rifle all the time really isn’t practical.”

Jeffry Smith, who led the group, planned to walk to Lock 3 after lunch. He was happy with the turnout, but disappointed with the lack of people on campus.

“I’m thrilled with the student participation. Facebook had a certain amount of students, but there are probably…more than twice as many [at the walk],” Smith said after laying down his FN PS90 rifle on a Penn Station bench before eating. “Unfortunately, the weather and the weekend have put a damper on the student population on campus. But it is as it is…it’s not gold, but it may be silver.”

Smith is hopeful for future activism at UA.

“[UA’s] firearms policy, compared to the other universities, is a relatively huge opening,” Smith said. “It makes future activism there much more easily achieved.”

“A number of students asked about having an activity mid-week, or during SpringFest,” Smith wrote. “…I’ll be glad to help make that a reality.”

If that happens, Smith can rest assured there’d be many more people on and near campus.