Aero Team beats all US competition 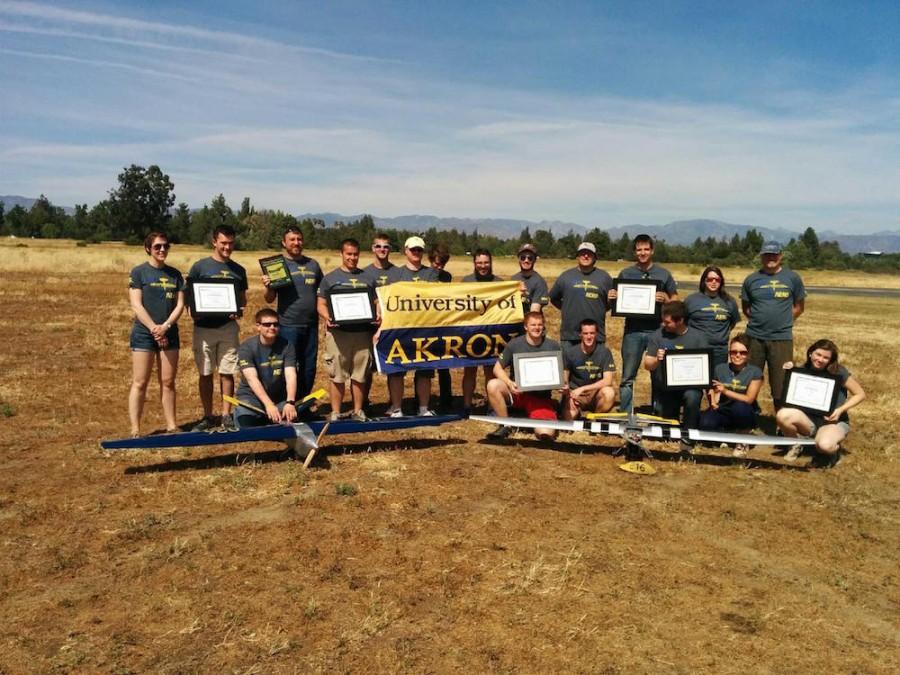 With a grand total of seven awards, the majority being for first place, The University of Akron’s Aero Design Team returned from its weekend competition yielding impressive results.

Held in Van Nuys, California, the SAE Aero Design West Competition brought together about 75 aero design teams from around the world to compete for three days in a row. Friday was the technical inspection and presentation day; Saturday and Sunday were reserved for the flying portion of the competition.

Teams could register planes for any of the competition’s three scoring classes: micro, regular and advanced.

In the drop accuracy category, planes had to drop a sandbag from at least 100 feet in the air toward a target. The team’s plane that dropped the sandbag closest to the target won.

“That is like, unheard of,” Hammell said. “We haven’t done well on the presentation in years.”

Just one week ago, this same aid-drop plane lay in UA Aero’s South Schrank Hall workroom, broken to pieces. The plane crashed in a practice flight.

“It was broken, it was mega-broken—I mean, it was the worst broken I’ve ever seen a plane…the wing was in two separate pieces,” Hammell said. “There was someone pulling an all-nighter every single night to put that plane back together in 4 days and ship it out to California [for the competition].”

Being in regular class, UA Aero’s cargo plane had a different task.

“All it has to do is get off the ground in the allotted runway distance, fly in a circle, and then land again in double the [original] allotted distance,” Hammell said.

But it did so while carrying a payload of 28.3 pounds—the plane itself only weighed 8.75 pounds. Further, the team missed its first round of flights with the cargo plane because of a problem that never happened before.

After a difficult start that left it in 12th place, UA Aero’s cargo plane climbed back up to get third out of 40 planes in overall points, first place with its technical report, and third place in highest payload lifted. It was only beaten by planes from two other schools—the Warsaw Institute of Technology and a school from Montreal, Canada, according to Hammell.

UA Aero beat every aero team at the competition from the U.S.

“Honestly, if you had asked me earlier in the year, I would have said that we wouldn’t even have two planes ready to go at competition,” Hammell said. “I was terrified we weren’t gonna get them done. But I’m extremely proud of what the team was able to pull together—even though it was last minute—and have a really good end to this year.”

Hammell is one of three co-captains of the UA Aero Team. The other two are Jeremy Hein and Evan Henrich.

“Yeah, we are losing some brain power this year,” Hammell said.

Hammell, however, has one more year with the team.