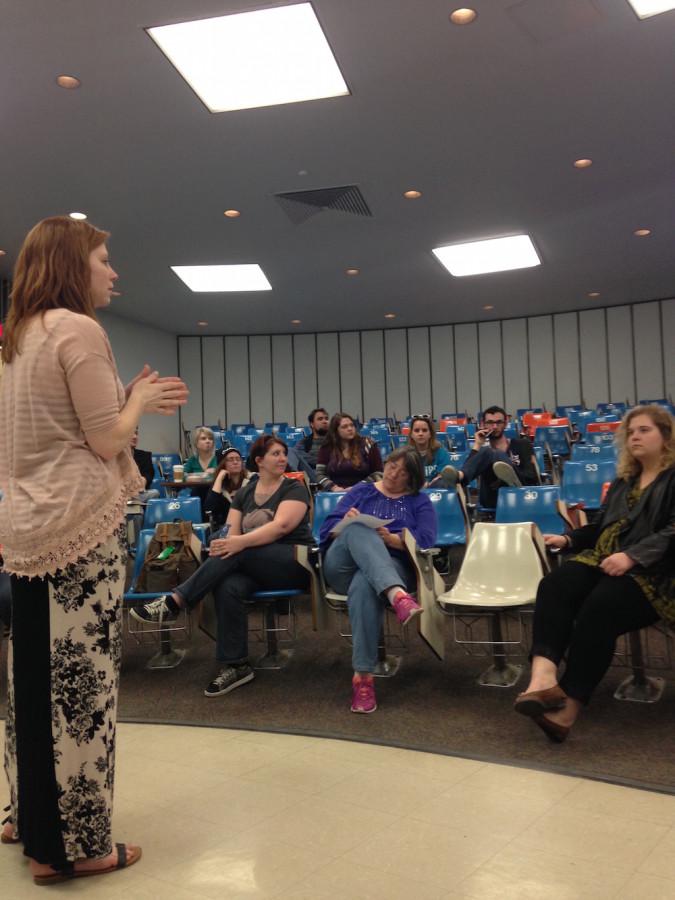 Love Markel speaks to a group in Olin Hall Room 124 on Friday, May 1, to organize the details of next week's protest.

Seventeen students gathered in Olin Hall Room 124 today, May 1, to work out the details of a protest against a name-change for The University of Akron.

The protest will take place next Friday, May 8, starting at 3:30 p.m. Students can join the protest at one of two meeting points on campus: in front of the College of Business Administration building, or just outside of the entrance to Spicer Residence Hall. Each group will then walk toward the center of campus to meet at the steps of Buchtel Hall.

“We will then have a peaceful sit-in in front of the administration offices until 6 [p.m.],” wrote Love Markel, the protest organizer, in an emailed statement. “Please feel free to bring signs, and wear your UA gear if you have any. This is a peaceful protest, so no violence will be tolerated.”

Markel, a third-year anthropology student, led the protest discussion in Olin Hall, which outlined not only the plans for the protest, but the arguments against the name change, and other details for what will happen until next Friday.

“My main argument…is that to change the name would change everything we stand for here at The University of Akron,” Markel said. “We are a very diverse student body, and the ‘polytechnic institute,’ even though [Scarborough] claims that it means ‘many sciences’—that’s just not what people think of. They think of the Polymer Science Building and the engineers.”

Scarborough could not be reached for direct comment; however, he did send out a tweet at 12:59 p.m. today.

“It’s great to see such passion for our University. We are focusing on a repositioning now, not specifically on a name change,” Scarborough wrote.

Why did Scarborough write this before the news of the protest? Two reasons: a petition and a speech.

Two days ago, UA alum Jessica Kaisk began an online petition on change.org, which aims to “Stop the Name Change initiated by Scott Scarborough.” Since, 6,085 people have signed the petition.

As for the speech, the name-change topic will likely be a part of Scarborough’s upcoming speech to The City Club of Cleveland at 12 p.m. on May 15.

Eileen Korey, UA Chief Communications Officer, released a statement to the media regarding the name-change and upcoming speech.

“Many variations of the term ‘polytechnic’ have come up in conversation, because polytechnic universities embody a rigorous model of interdisciplinary education that values the arts and humanities as well as science and technology,” Korey wrote.

Markel, and others, disagree.

“If I go to a job interview with a degree from a four-year college in anthropology and classical studies under the name of ‘Polytechnic Institute,’ they are going to laugh,” Markel said. “Sounds like I bought my degree online…I mean, I have only paid over $42,000 to this University.”

Nyc Pamboukis, a third-year anthropology student, expressed his views on the name-change at the protest meeting.

“What it’s saying to us is: What we care about, what we study, doesn’t matter, because it doesn’t reflect what [Scarborough] wants to focus on,” Pamboukis said.

Tannya Forcone, also a UA anthropology student, has a husband who graduated from The University of Akron. She worries what a name-change might do to UA’s history.

“A new name would disassociate our history—it would break the link,” Forcone said. “It devalues everything.”