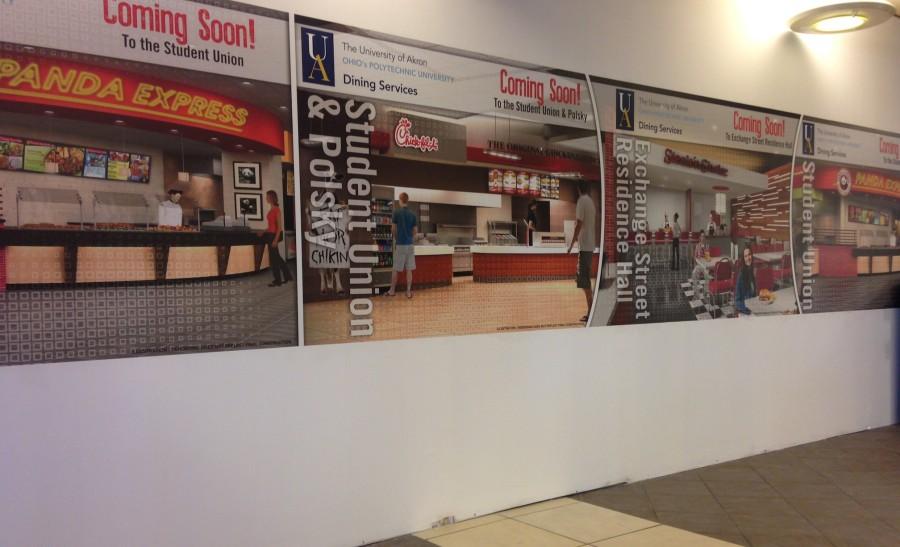 Current view of what was previously Ohio Burger in the Student Union. Other venue construction going on around campus.

Students can expect a different dining experience this fall, as UA recently hired the Aramark Corporation to take over its Dining Services.

Aramark is a big company—207th of the list of Fortune 500s—that provides professional services to communities and institutions worldwide. It operates on many other college campuses in the U.S.

Aramark’s employees have only been on UA’s campus since the company was officially hired on July 10, which is an unusually short transition time, according to Thomas George, a UA alum and resident district manager for Aramark.

“A normal transition takes about five months,” George said. “This has been five weeks. So we are transitioning pieces at a time, instead of the entire body.”

George says, in consequence, their primary focus is on changing and improving Rob’s Dining Hall.

The main change students will notice is a “culinary reboot”—a term coined by Eugene Walters, Aramark’s district marketing manager—that will bring an updated and “upgraded” menu.

“We have a large amount of unseen changes though,” Walters said, “changes that students couldn’t see—new equipment and an immense amount of safety and food-handling training that the staff gets.”

Yet limited transition time prevents Aramark from immediately fulfilling all its goals for Rob’s. Future changes include conspicuous nutritional information of all the food; the use of real plates and silverware rather than paper and plastic products; student-viewable food preparation and cooking areas; and more theme dinners, according to George.

Students will notice many other food venue changes across campus, too.

Ohio Burger will be turned into a Chick-fil-A and a Panda Express.

The Summit Bistro in the Polsky Building will be a Chick-fil-A Express.

Polsky’s candy bar, along with every Zee’s convenience store on campus, will eventually be turned into P.O.D. convenience markets.

The Creamery will be turned into a Steak ’n Shake.

In 2016, Starbucks will replace the Bierce Library Einstein Bros.

Also in 2016, Einstein Bros. will move to where Auntie Anne’s currently is.

Trackside Grill and the Union Market will remain, but their menus will be “upgraded as quickly as possible,” Walters said.

Walters added that the venue changes were to get rid of the “low performers.”

Because all this construction will take a while, temporary food venues—“kiosks”—will be put in place to “alleviate some of the pressure while the new venues are being built,” George said. “We are in a mad scurry to get things done.”

Referencing the inconveniences students might have while all this construction is going on, George added: “You’ll see a frenzy to get to Chick-fil-A; you’ll see more participation from the student body; there could be long lines because of the large volume.”

But what about the Dining Services employees of last year?

As for students, they have all “come back or been rehired,” according to George.

George said last year’s management is in a similar position: they still work for UA, but will eventually be transferred to Aramark.

“For the most part, everyone who was here has the opportunity to get even more or better jobs with Aramark,” George said.

Walters said students will likewise have more opportunities to be employed and move up in the ranks in Dining Services than last year.

Yet with all these changes, one thing will remain: meal plans. They are the same as they were before.

George, Walters, and Kevin Strub—Aramark’s general manager of operations—all profess a heartfelt connection with UA and the broader area of Northeast Ohio.

They said most of the new Aramark leadership is the same—either living in, working in, or from the area—and that this affinity toward Akron’s community adds an important aspect to the new Dining Services.

“We’re all from here,” George said. “It’s important to run a business in the city that we’re in and that we’re form—we’re a part of it.”

Aramark plans to be done with all its construction and renovations “this [time] next [year],” according to Walters.

Gary Goldberg, UA’s previous director of Dining Services, will not be returning.