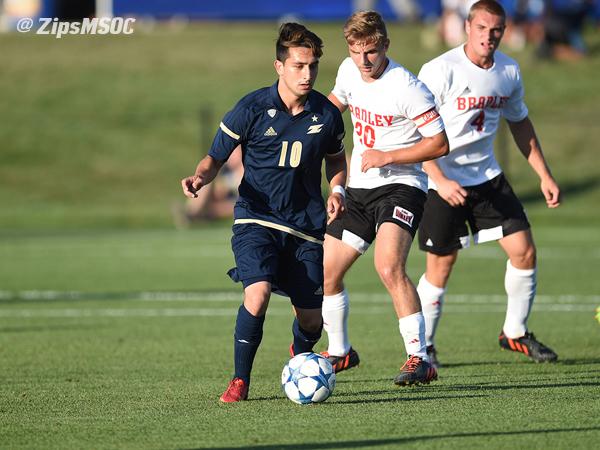 The Akron soccer team (3-1-0) registered top notch victories over No. 4 Georgetown on Friday and No. 6 Maryland yesterday. The Zips now find themselves ranked No. 22 in the latest College Soccer News poll.

On Friday, junior Adam Najem found the back of the net at the 62:54 mark of the game and the Zips defense completed the 1-0 win against Georgetown. Sophomore Nate Shultz had the assist on Najem’s goal.

Goalkeeper Jake Fenlason recorded the shutout and was responsible for 5 saves in the contest.

Yesterday, Najem scored again to put the Zips on the board at 21:41, but the star of the game was sophomore Richie Laryea. Laryea assisted on Najem’s goal, but later added to unassisted goals of his own as the Zips prevailed 3-2.

Maryland notched a goal to close the gap to 3-2 but the defense of Akron held the rest of the way to complete the weekend sweep.

It was the first time since opening the championship season of 2010 that Akron has beat two top ten opponents on the road.

Before the game, the Mid-American Conference announced that Najem was named the MAC Men’s Soccer Athlete of the Week.

This Friday, the Zips will open their 2015 home portion of their schedule against Saint Louis to FirstEnergy Stadium – Cub Cadet Field. Kickoff is slated for 7 p.m..