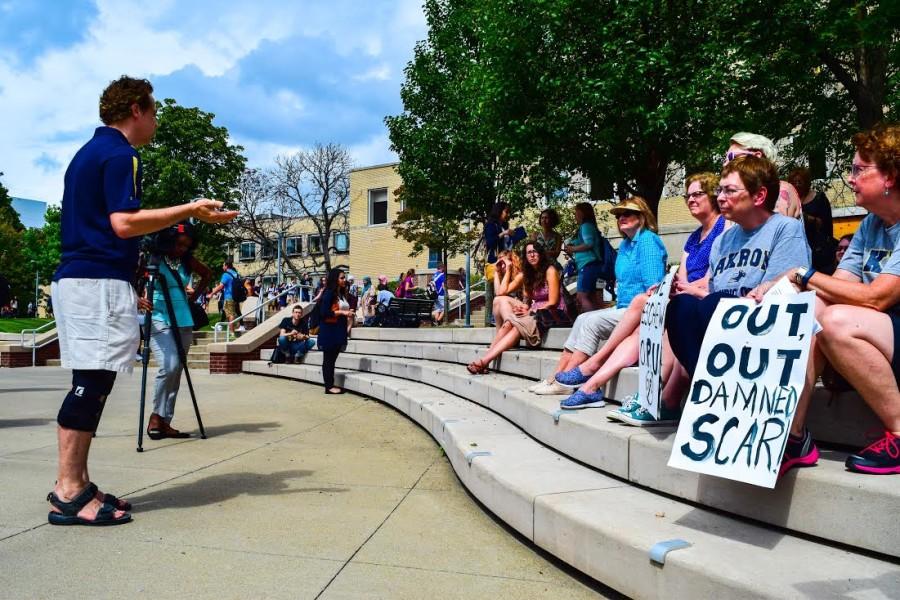 Students gather to voice their opinion on the university president.

The Buchtelite acknowledges a mistake in the print version of this article: Alyssa Perrone’s name is spelled incorrectly as Alyssa “Parrone.”

Recent backlash toward job layoffs, program cuts, and lack of transparency prompted students to form a protest behind Buchtel Hall on Wednesday, September 9.

“Hijacked by Hijinks” attracted students, staff, and others from the community to gather to express their opinion and listen to others express theirs.

Leading the protest was Tom Guarino, a graduate student who is working on a second master’s degree in music.

“I think it all begins with the students,” Guarino said. “If the students aren’t willing to speak out on these issues collectively, then nothing is going to change.”

Student Alyssa Perrone, pursuing a degree in the Bachelor of Arts, stopped to watch the protest. She said what compelled her to stop and talk is that she believes the people of the arts aren’t always acknowledged.

“I hope that it gets people listening, and that it shows students are willing to take time out of their busy day to talk about these issues,” Perrone said. “I hope that people take the time to acknowledge our educated way of bringing these issues to life.”

Hijacked by Hijinks was formed on social media by the “Allied UAkron” Facebook account. Social media proves to be a popular form of expression, as shown by Twitter accounts such as @ssolivejar and @FireScarborough. Facebook pages such as “Save the University of Akron from Scott Scarborough and the BOT” have gathered hundreds of followers and are using social media as an outlet to express their views.

“Personally I was never that in to Facebook, until I found out that it was a good tool to bring awareness to the things such as something like this,” Guarino said.

Guarino wishes more people participated in the protest, but believes that since many of the occurrences happened over the summer, there’s been a lack of awareness because students have been away.

“I’m hopeful that for the next one, more people will get involved and there will be more press coverage,” Guarino said.

The next protest will coincide with the next Board of Trustees meeting on October 13 at 9 a.m.