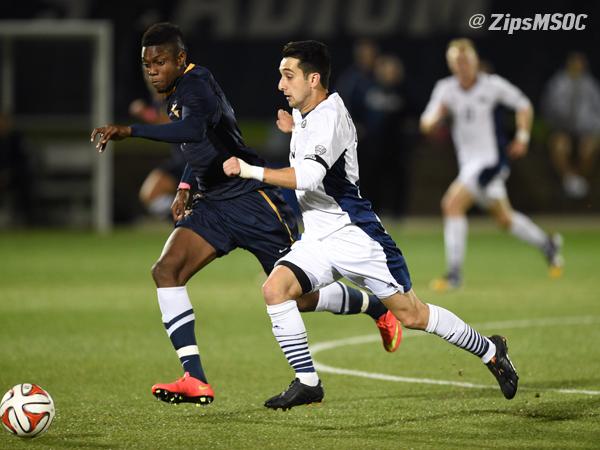 No. 10 Adam Nejam running after the ball last season against the University of Michigan.

After facing a 2-0 deficit, the Akron Men’s Soccer team (4-1-0) rallied to defeat the 14th ranked Saint Louis Billikens. The comeback extends the Zips winning streak to three that included two huge wins over top-ten ranked teams Georgetown (No. 4) and Maryland (No. 6) last weekend.

The Billikens jumped on the Zips from the opening whistle, capitalizing on the Zips’ slow start. Freshman Striker Anthony Brown netted the first goal in the second-minute, and a crucial mishandle by the Zips defense led to Saint Louis’ second goal by Defender Filip Pavisic in the sixth-minute.

The 2-0 deficit stunned the Zips home crowd and forced Akron to respond before being blown out in their home opener. As the rain began to pour on, the Zips began to create chances on the offensive end with 13 first half shots and 23 for the game.

Sophomore Striker Sam Gainford reignited the crowd of nearly 3,000 at FirstEnergy Stadium-Cub Cadet Field with a goal in the 39th minute, and the Zips never looked back.

A halftime break and increased rain conditions did not slow Akron’s momentum, as their offense picked up where they left off, keeping the Saint Louis defense on their heels. Junior Midfielder Adam Najem netted the equalizer at the 52nd minute mark, setting the tone for the rest of the second half.

In the 70th minute, Gainford scored his second goal of the game with a classic chip shot over the Saint Louis goalkeeper to break the tie, 3-2. Gainford served as a catalyst for the Zips, dictating midfield play which led to countless scoring opportunities for Akron.

The Zips defense also remained stiff, pitching a shutout in the second half, led by Senior Goalkeeper Jake Fenlason who had a critical save at the end of the game, deflecting a long-distance strike which could have tied the score in the final minutes.

The Zips welcome in-state rival, Ohio State, in their next match at home this Wednesday night, September 16th at 7:00 p.m.. The Buckeyes not only serve as a great challenge for the Zips, but also as extra motivation. The Zips were eliminated by Ohio State in last season’s playoffs in heartbreaking fashion via penalty kicks.