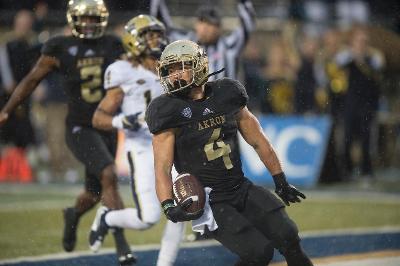 Connor Hundley scores for the Zips.

The University of Akron Men’s Football team lost their home opener against the Pitt Panthers, 24-7, in front of rain-soaked 23.425 fans Saturday evening.

Pitt was able to avenge last September’s loss to the Zips at Heinz Field, as Qadree Ollison ran for 81 yards and a touchdown.

One could have not predicted the amount of rain that fell Saturday evening, as the tone was sure to be that the team could take care of the ball and limit mistakes in the poor weather would probably prevail.

The game opened up slow as the weather dictated the pace while teams tried to feel their way into the flow of the game.

The Zips’ defense, led by Jatavis Brown kept Akron in the thick of things with his defensive pressure as Tra’von Chapman and Kyle Pohl traded possessions and attempted to get the Zips’ offense rolling in the right direction.

The Panthers broke into the score column first on a 13-play, 59-yard drive that resulted in a Chris Blewitt field goal and a 3-0 lead.

Nate Peterman replaced Chad Voytik at quarterback for Pitt as they looked poised to score again early in the second stanza with a first down at the Akron 20, but the Zips’ defense held and Blewitt was wide right from 34 yards out.

The Panthers had another opportunity when they caused Imani Davis to fumble after a completed pass from Chapman at the Zips’ 35 yard line. Dylan Evans and Brown sacked Peterman on fourth down to thwart another scoring chance.

On the ensuing possession, the Zips’ seemed to find their zone as they took a 7-3 lead when Connor Hundley broke through the middle of the line and sprinted 32 yards to the end zone. The beginning of that drive saw senior Kyle Pohl enter the game for Chapman and hit Davis for an 18 yard gain.

Peterman hit J.P. Holtz for 18 yards to cap a 8-play drive to end the first half and give the Panthers a 10-7 lead heading into the locker room.

With the momentum, the Panthers refused to look back, and took control after the break. The Panthers ran the ball consistently in the second half as they ended the game with 127 yards on 46 carries. Ollison, admirably filling in for reigning ACC Player of the Year, James Connor, who is out for the season after a major injury in Pitt’s first game against Youngstown State, scored his touchdown in the third quarter on a 2 yard run.

The Zips, who only managed a total of 110 yards of offense for the night, were lead by Hundley with 59 yards on his 11 attempts including his touchdown. Chapman and Pohl were a combined 7 of 22 for 63 yards for the game

Akron will now look to bounce back in a Game against 0-1 Savannah State at InfoCision Stadium this Saturday, the 19th. Kickoff is set for noon.