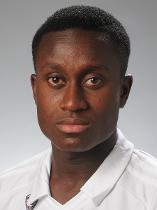 Richie Laryea, of the Zips’ men’s soccer team was just selected by the Mid-American Conference as the MAC Men’s Soccer Athlete of the Week. This is the sophomore’s first league award and it marks the second week in a row that a member of the Zips has been honored (Adam Najem last week).

Laryea, a native of Toronto, Ontario, had two goals and an assist in Akron’s 3-2 win on September 7, and collected a pair of assists, including on the game winning goal by Sam Gainford, in Friday night’s come from behind victory against Saint Louis.

Laryea and his teammates look to extend their 3-game winning streak this Wednesday evening against The Ohio State Buckeyes at FirstEnergy Stadium–Cub Cadet Field. Kickoff is slated for 7 pm.