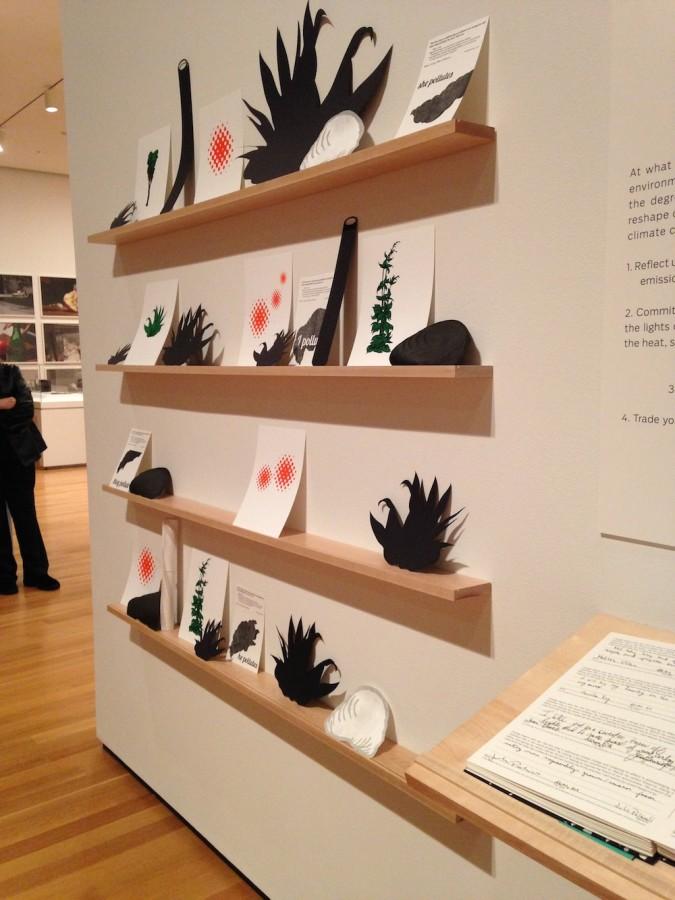 Visitors could take a piece of art in exchange for promising to reduce their footprint on the environment.

A crowd gathered at the Akron Art Museum on Sunday, Sept. 13 for UA printmaking professor Charles Beneke’s art talk, during which he explained his work “Specter” and the inspiration behind it.

“I invoke notions…to address our cultural penchant for excess, capacity for valuing individual wants over societal needs and ability to disregard the adverse effects of our actions until faced with the catastrophic,” Beneke wrote in an artist’s statement at the exhibit’s entrance.

Beneke developed ideas for the piece last spring, but only began printing in early July and installing on July 15. He built its structure in one of UA’s open galleries that was similar to the piece’s museum space. The show opened on Aug. 1.

In his talk, Beneke reflected on his worldwide travels and experiences that led him to his stance on the environment, and what he thinks people must do to preserve it. He also provided a means for visitors to do just that.

Near “Specter” was a little stand with a book on it, in which visitors could, after thinking about the ways they “personally contribute to the carbon emissions that pollute our atmosphere,” write down ways they would commit to “reducing [their] imprint upon the planet.”

The visitors could then take one of many small pieces of artwork from shelves next to the stand, as a reminder of the commitment they made in the book.

Julie Polsinelli, a senior studying art history and a student of Beneke’s, says she attended not only to enjoy the art, but to reciprocate the unequivocal support he gives to his students.

“You don’t always get to see your professor’s work,” Polsinelli said, “and it’s just so cool to be taught by somebody who has mastered his craft so well, which is inspiring.”

Some UA faculty and administrators made a showing too, including Larry Burns, vice president for advancement; Lakeesha Ransom, new dean of the Honors College; and William “Mike” Sherman, senior vice president, provost and chief operating officer.

“We were approached by Mark (Masuoka, the museum’s executive director) if we would help financially a bit with this, so of course we did,” Burns said, adding that he is a friend of Beneke’s. “It’s a way for us to start strengthening our relationship with the museum; in the next several months you’ll hear more about what the University is doing with [it].”